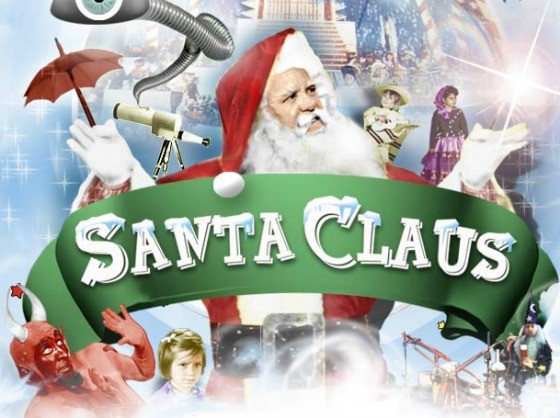 Tonight, Mystery Science Theater 3000's Bill Corbett, Michael J. Nelson and Kevin Murphy will be live-riffing the befuddling 1959 Mexican film Santa Claus in theaters nationwide (and at AMC 14 in Chesterfield). Santa's outer-space team and the wizard Merlin will battle Satan on the big screen just in time for the film's 55th anniversary. But it's not the only thing Corbett's leaving under your Christmas tree this holiday season, as his graphic novel Super-Powered Revenge Christmas plunges into stockings and onto store shelves now as well.

Super-Powered Revenge Christmas takes icons of the holiday season and reboots them in a much-needed Super-Powered Revenge makeover. Originally conceived as a play, Corbett tells us the themes of the show lend themselves well to the comic world: "I added the frame of a couple arguing at a bar about making a comic that rebuilt Christmas from the ground up. It was really fun reinventing the Christmas pop-culture characters we know and embracing the comic-book ideas."

Not alone in his desire to mix Season's Greetings with Season's Beatings, Corbett was able to fund the book's release through Kickstarter. "Almost all of that money was to hire the artist, Len Peralta, who was a guy I knew who would be just perfect for the style. It was a real occasion for me to translate this into an actual comic book." Corbett likens the process -- his first foray into comics -- to writing a screenplay, as it required him to think more visually. "It's not as rigid a format as screenplay writing, as long as you're communicating it well and giving the artist the picture you want to run with it. The biggest challenge for me was not overstepping every page, so I had to edit like crazy. It's usually good that I cut and slash."

As for the big-screen Christmas carnage, Corbett and company have a lot to live up to following last year's Yuletide RiffTrax foray, where they cracked wise over the immortal seasonal standard Santa Claus Conquers the Martians. Corbett says of Santa, "It's right in our wheelhouse. We wanted a Christmas show, and these weird alternate versions of Santa Claus are funny, but they're also bizarre and sort of an anthropological experiment. Like, this is what people came up with for Santa Claus in the '50s in Mexico? You can see some cultural stuff is starting to take hold, like spaceships and sci-fi in general. As funny and cracked as it is, it does have a fair amount of imagination to it."

The film's imagination strikes Corbett as exceptionally weird, especially today. "The fact that he's got a whole bunch of children from different cultures trapped on his floating space capsule as his unpaid labor is not very nice. And imagining the reindeer as wind-up toys instead of the traditional guys with the names is pretty interesting. Add to it, it gets filtered through this American producer who dubbed out the voices of the actors and does them all himself."

With Mystery Science Theater 3000 recently celebrating its 25th anniversary, the guys at RiffTrax have probably spent more time than anybody rewatching bizarre movies and writing jokes around them. This unique, seasoned skill has resulted in an interesting writing process. "It's changed a little bit since the MST3K days when we all had a central office and would watch the movie together with one of us at the computer typing while the rest of us blurted out jokes and had a big mess of a raw script to find the best lines.

"We do it a little backwards now, starting from us geographically in different places. Now we divide the movie into chunks and each take a part of it and write the first draft on our own. It's Mike and Kevin and I and we have two writers we hired a few years ago who are really good at this. From there, we smash it all together and usually find there's a repeated kind of joke. Sometimes there's low-hanging fruit and sometimes there's even stuff that doesn't even make sense, like Mike and Kevin and I will all have made a joke about Bob Seger that has nothing to do with it. That's always weird. We go over it more and more, and go with a finer-toothed comb for the live shows to make sure it's more performable and leaves time for audience reactions."

When not writing his own Christmas comics or Christmas commentary, Corbett has a fondness for a few less popular Christmas songs. "I know they're really bad, but I enjoy them. There's a John Denver song called 'Daddy, Please Don't Get Drunk This Christmas' -- it's so maudlin. Have you heard the Tiny Tim Christmas song 'Santa Claus Has Got the AIDS?' He denies it's about the disease, but there's no other way to take it. I think he might have tried to make a cheeky novelty song, and people were like, 'What are you doing?' so he backed down a bit."