Someone Still Loves You Boris Yeltsin, Photos, Review and a New MP3!

Say Panther has been hard at work recording an album lately, and it shows: The young collective just sounds more confident playing both older material ("Oh What Fear") and newer compositions.

Jumbling Towers has been recording as well, and plans to release its next batch of songs online -- for free. (Details soon.) I've seen the quartet perform new stuff live twice now, and I'm somewhat disappointed in its most recent songs. One in particular was just a series of verses and no chorus -- which could work, except that there were no dynamic shifts or variations to make it interesting. A few songs highlighted keyboards more, while one in particular (don't know titles, sorry) revealed a huge Pixies influence (specifically, the howling riffs of "Where Is My Mind?"). But when compared to the band's older material, the new songs faded into the ether, and just weren't memorable.

SSLYBY headlined the night and played a looong set covering new songs and old favorites from Broom. (The band also broke out a cover of Nirvana's "Lithium" AND Arrested Development's "Mr. Wendal.") My show buddy Keegan commented that someone in the band looked a lot like Michael Cera from Superbad -- which made me realize that SSLYBY itself is pretty much Superbad rock.

"Say what?" you might say. "What's Zaleski going on about?"

What I mean is that its music is sweetly nerdy -- heck, the band's always wearing plaid shirts, even in the summer -- and completely pure and well-intentioned. It's really impossible not to like them. There's no pretention, just inoffensive, straight-forward rock indebted to R.E.M.'s earnestness, Built to Spill's fuzzy pop, Wilco's twang and any number of clean-cut college rockers (Guster, etc.) This grew somewhat tiresome over the course of the set, but overall it was a pleasant way to end a Saturday night.

Need proof of the band's cuddly factor? Here's a new MP3 of the song "Glue Girls," from Pershing, which comes out April 8 on Polyvinyl Records. Very whimsical indie rock without being overly twee or cloying. Thanks to the band's publicist for the music.

And here are pictures of the band AND of this crazy, insane dancing dude who busted many moves throughout the whole night. He ended up on stage with the 'Yeltsin. Courtesy of Keegan Hamilton. 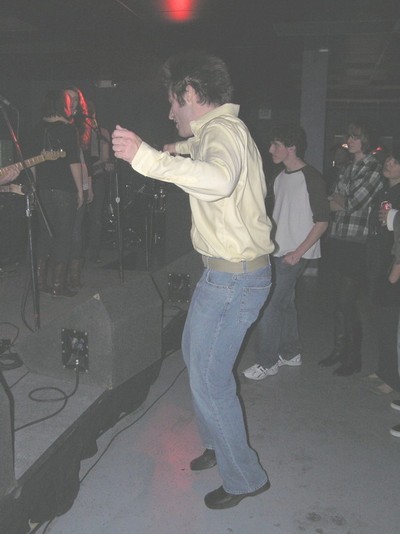