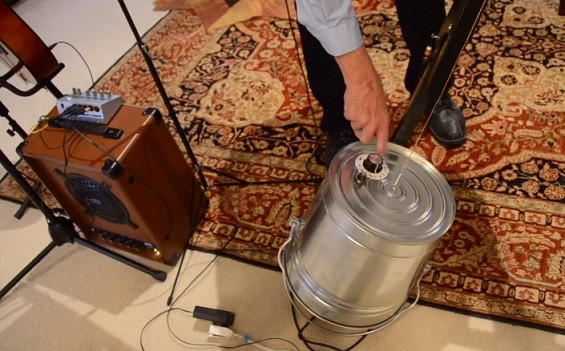 A St. Charles-based man named Dave Senften, with a little free time and a lot of technical know-how, has created a new musical instrument: the AutoBass. Senften -- who holds degrees in physics, math and electronics -- tells a tale as old as time, one wherein necessity gives birth to invention.

"Electronics has been my life, basically," he explains. "I've done a lot of product development in various fields, and this was an opportunity to use those skills, because we're in a small gospel quartet -- country gospel -- and we needed a bass."

The AutoBass is, essentially, an upside-down metal paint bucket mounted to a length of wood, which has eight nickels embedded in it to create a fretboard. A dial on the bucket allows the user to choose a key, and a string drawn across the nickels is used to select a chord in said key. It is a simple, push-button format with a result not unlike an autoharp -- but for the bass instead.

"I wanted to develop an instrument that was easy to play and quick to learn for somebody that had a little bit of musical knowledge, but not a bassist, per se," Senften says. "The big thing about it is it's so easy to pick up, and it makes good music."

RFT Music enlisted some School of Rock students to try the instrument out and tell us what they thought.

"It's pretty easy to get a hang of," says student Austin Neukirch after taking the AutoBass for a test drive. "I like the design; it's nice. It reminds me of one of my guitars. I like the nickels in the fretboard."

"I started playing bass about three years ago," says fellow student Kate Hassler. "The AutoBass is -- I think it's amazing how something so simple can be so complicated."

"I think it's a fun instrument for folks who want to be able to make something that sounds nice right away," says School of Rock music director Jordan Heimburger. "It can be fun to think through music in a different way, too. I think the tone is nice, so I can imagine some folks having a good time with it for sure."

Watch the AutoBass in action below, and learn more about the instrument on its official website.