St. Louis' 18andCounting Releases a "Brick of Music" with TheBirdsAtThisHour

On a rainy Sunday night in late November, multidisciplinary artist Stan Chisholm is at work in an unheated second-floor loft space just off Cherokee Street's main drag. Dubbed the Screwed Studio, Chisholm shares the space with five other artists, but tonight he has the place to himself. Chisholm, who records boundary-pushing hip-hop as 18andCounting, often accompanied by a hodge-podge of live instrumentalists, is in prep mode as he puts the finishing touches on TheBirdsAtThisHour, a multi-event, multimedia release that sees its culmination on Friday, December 9 with a party to celebrate the collection of songs.

He calls the release a "brick of music," and he means that literally; on this particular evening, he shows off a collection of red bricks taken from the banks of the Mississippi River. A few have already been painted black and stenciled with the album title, using the same imprint with which Chisholm has branded his work as 18andCounting — a chunky serif font with no spacing that is often used for brief, declarative statements cast on a projection screen. TheBirdsAtThisHour is a slightly more cumbersome phrase than those he's used in the past, befitting the scope of the project, which is his first release since 2012's beats-free, vocals-only Unstrumental Raps. 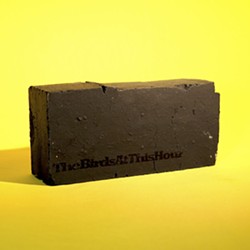 Those who purchase the music will get a digital download — that ephemeral, mutable format of choice for most listeners — but they'll also walk away with one of these painted bricks.

"It's a statement, it's a stamp — it says, 'This is how you hear this music,'" says Chisholm of the set of songs (and its delivery method). He had considered pressing the music to costly vinyl or largely out-of-vogue compact disc, but settled on this pairing of something heavy and tactile with a modern delivery system.

Heavy as they are, the bricks' gathering and painting seems like the easy part of the project; just two weeks before the album's release, Chisholm is still tinkering with the track listing.

"It's just its own thing," continues Chisholm. "I just need it to be something I get done this year, and I need there to be a lot of question marks around it, because I think that's what a lot of my work is meant to raise."

Chisholm intends for this album to serve as a marker for his music in 2016, which saw him working in a new studio space and experimenting with different collaborators. "I think the producer's seat has returned to me this year, in a way that I like," he says. "I can direct people to play things as well, and I can determine how a sound is going to be captured. Then I get to decide how it lays in — that's something that is pretty exciting this year."

Chisholm's most steady collaborators can be found in TheOnlyEnsemble, his live band. It includes the classically trained violinist Sarah Vie, Brennan England on a home-made didgeridoo and Patrick Boland on drums. The only snippet from the album to be released shows Chisholm's fluidity with genre; it's a cover of XTC's "Complicated Game" that mixes guttural percussion and distended pizzicato strings with Chisholm's pitch-shifted vocals. 18andCounting's version trades in the original's herky-jerky New Wave production while amplifying its disorienting paranoia. While the rest of the album is a bit of a mystery, Chisholm says that he is using the tracks to reflect the collaborations and relationships he's forged in his studio in 2016, including those with ICE, Loose Screwz and Mike Herr.

The three TheBirdsAtThisHour shows kicked off at three different venues in October; each show amplified a different facet of Chisholm's artistry, though he looks at this album as a way to reassert his position as a lyricist and musician after several years as a high-profile DJ around town.

"The hardest thing has always been being limited and not being properly represented in the things that I've done — not only with what I spend my time on but what I have done very strong and solidly within this city," says Chisholm. "DJing is the newest thing I've been doing, but I've been making music and writing music since I was thirteen years old; I've considered myself a visual artist since I was six, and that's still what I am."

The December 9 release show for TheBirdsAtThisHour will take place at the Screwed Arts Studio. It's not being publicly advertised, though Chisholm encourages the curious to do a little digging to learn about it.

Listen to "Complicated Game" from the new album below: