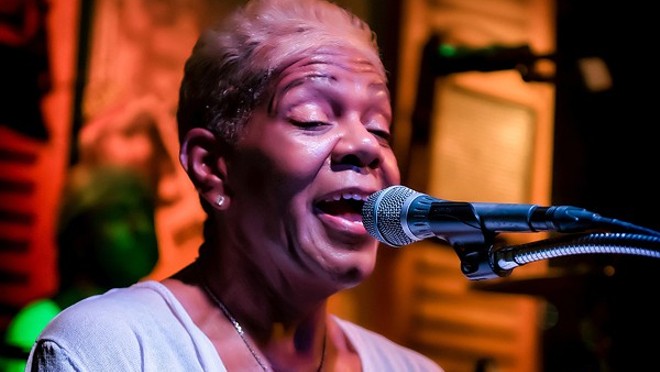 PRESS PHOTO
Kim Massie has gone up to play the big gig in the sky.

Kim Massie has gone up to play the big gig in the sky and we St. Louisans are heartbroken. Local social media accounts lit up last night as the news of her passing spread across town.

Massie was St. Louis’ best and most celebrated blues diva. She was not only one hell of a singer, she was also a born entertainer who interacted with her audience in unique and fabulous ways. Massie could have you laughing at a dirty joke and then crush you with the power of her voice all in the same few minutes. She was magical. She was magnetic. And she was ours.

Not only did Massie play the last-ever show at Beale on Broadway, she held court there twice a week for nearly twenty years as she built up her reputation as a powerful and charismatic performer.

Off stage, Massie was just as warm and charming. Her Facebook Live videos were great, too, and in them she would talk directly to fans, give advice and even show off what she’d been cooking in the kitchen.

Massie was a common sight around town — and not just in the blues clubs. She popped up all over the place, doing performances at parties, events, festivals and more. She headlined our own Riverfront Times music festival last year and we’ve honored her skills many times over the years, including giving her our “Best Vocalist” award on multiple occasions.

Massie even played on stage under the Gateway Arch in 2007, opening for Cyndi Lauper in the Live on the Levee series. Many people think of Cyndi Lauper as a novelty '80s star, but Lauper has serious singing chops — and even she was clearly impressed by Massie, asking if they could sing together on stage.

They sang together for Lauper’s versions of “Girls Just Want to Have Fun,” “Time After Time” and Etta James’ “At Last.” It was a night for the St. Louis music history books and when this reporter mentioned the performance to Massie the next year at one of her shows, her eyes got wide and she grabbed my arm excitedly and said of Lauper, “That tiny little white girl can sing! I had no idea!”

Kim Massie’s path to becoming a local music icon took many twists and turns. Like many blues singers, she grew up singing in the Black church, but she has never confined herself to the expected. In fact, classic rock was some of her favorite music to listen to as well as perform, and she was fond of mixing things up on stage at the blues clubs with a little bit of Led Zeppelin.

“I don’t like being pigeonholed or stereotyped. You see this Black woman so you’re thinking gospel, or jazz or blues, something like that. OK, yeah,” she told St. Louis Public Radio last year. “But I’m much more. And that’s what keeps me workin’.”

Through her years, Massie morphed from church singer to award-winning karaoke queen before scoring legit gigs singing with St. Louis blues icon Oliver Sain. She hustled and struggled for decades to become one of the most respected and trusted artists in town. You knew if you hired Massie for a show that she would give it her all.

And it seems as though she did give it her all until the very end. Though her family has not yet released details about her passing, Massie endured myriad health problems. She had thyroid surgery a few years back and had recently fought off pneumonia and sepsis. In February of this year, she’d even survived a heart attack that happened on stage at BB's Jazz, Blues and Soups.

St. Louis won’t be the same without her. So we send up a big R.I.P. to Kim Massie, who will remain a legend forever.

The amount of joy you brought to so many people everytime you set foot on any stage throughout St. Louis, and especially on S. Broadway is insurmountable... you will be deeply missed Kim Massie 💜💛💚

RIP and sing for the angels. pic.twitter.com/TmfkoLsuKP

Huge loss for #STL music community with the death of Kim Massie, here singing at the wake for Johnnie Johnson in 2005. pic.twitter.com/KNslNxDt2I