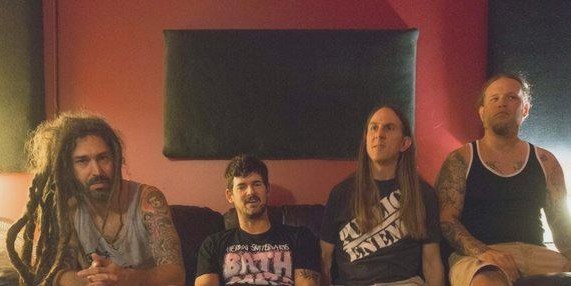 Photo courtesy of the band
Hell Night with new vocalist Brian Fair, left.
St. Louis' Hell Night has always been a band that's a bit tricky to describe. Sludge-punk? Race-car-metal? Chainsaw-electrocution-core? Whatever it is, it's loud and pissed off and incredibly urgent.

That sense of urgency is also prevalent within guitarist Andy White, bassist Eric Eyster and drummer Adam Arseneau's combined work ethic. Just four months after the sudden departure of longtime vocalist Mike Craft, Hell Night has returned with Bryan Fair of the Grammy-nominated metal band Shadows Fall. They got knocked down, but they've gotten up again. Some might say that you're never gonna keep them down.

Hell Night already has loads of talent in its lineup. Tilts, the Blind Eyes and Shame Club are just a few of the highlights on White's local music resume. In 2013 he began doing some experimental jamming with skateboard buddy and drummer Tim Pinkerton.

"What came was a sort of surf-drum punk-grindy synth-guitar thingy, with me mainly trying to rip off like, Trans Am bass riffs and East Bay Ray guitar parts," White says. "It seemed pretty cool. I loved that we both skated — I felt like that was important in regard to the general energy of things, and a spiteful dismissive musical vibe. I felt like what we were doing sounded like a robot spitting on people. We felt it was band-worthy. Eric Eyster is my best bud and we played in Shame Club together forever and always wanted to do something a bit more violent."

After securing Eyster on bass and slapping the title of a 1980s Linda Blair horror film on the project, the hunt was on to find someone who could front the aggressive new band.

"My crazy friend Mike Craft, who had never sung in a band, wanted very badly to do it," White says. "Mike is a very honest, tattoo-laden, chain-smoking, motorcycle-riding brick mason who loves jazz, is a great drummer, loves like the Dead and had never owned a Black Flag album. Perfect. What he brought was unique, pure, raging and awesome."

The release of multiple EPs and a slew of live shows followed before Pinkerton relocated to Louisville and Adam Arseneau stepped in as a replacement, his hard-hitting style tweaking the band's sound into something even more vicious.

"Adam was just this guy who came to a bunch of the shows. I didn't know he was a drummer at all until I saw a link he posted on Facebook of him playing along accurately with some Torche and Kvelertak. He rules," White says. "He’s a machine gun and is nothing like Tim. He brings incredible power and spastic speed to things. I think it's awesome to get something totally different if you are looking for a new member versus trying to replace a dude, and Adam is for sure just that. And most importantly, he loves Hell Night and gets it. He’s all in."

There was no announcement made before singer Mike Craft's departure this past April. An enjoyable final performance was favored over something that might be tainted with a sense of sadness or finality. Unsure of how to continue, White again made a connection through his love of skateboarding.

"Mike split. He wanted to do other stuff. His own music, another path," says White. "Here comes Brian Fair. He has lived here for a while and had seen us a few times, as his wife grew up with Mike. So actually, Mike basically recruited his replacement by introducing us to Brian. 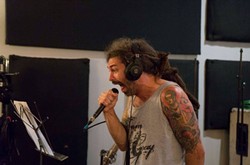 Photo courtesy of the band
"Brian works with a buddy of mine; we are very close to same age and he skates. We skate," he continues. "I know he had heard our shit and seen us a few times and likes us. I just hit him up and said would you like to jam. He was down. I mean to be honest, if this dude was just some regular dude from St. Louis with dreads as tall as him that skated, and had the music knowledge, and the lyrical creative chops, and the gnarly life-biting shark vocals that he had and weren't in Shadows Fall, he would totally still be the dude. He rips."

White is aware that fans of Hell Night, as well the Shadows Fall fans who are going to check out Fair's new project, are likely to approach with a presumed sound in mind, but he doesn't consider it a concern in the slightest.

"Brian is not a Mike replacement, nor does he erase the Mike era of Hell Night," he says. "He is a totally different animal. We recently recorded a new seven-song EP at Encapsulated with Gabe Usery and we will put that in front of some labels to see if someone wants to put it out, but we want to put it out soon. It’s called Human Shelves. If previous fans of Hell Night or Brian’s other projects don’t get their expectations met with our music then that is awesome. We would always take surprising people or doing something new over cranking out a familiar-tasting product."

When asked his thoughts on teaming up with White and the rest of the crew, Fair made it clear that these four weirdos have a promising future, and are going to get along just fine.

"I have always been about giving back to the community, and when I saw these underprivileged kids with learning disabilities trying to start a loud rock band I figured I would throw them a bone and yell some gibberish over their bullshit," he says.

A headbanger and a humanitarian. Hell Night is in good hands.