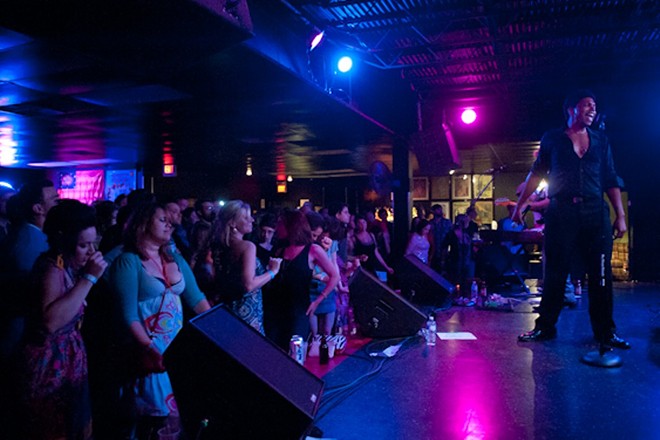 JON GITCHOFF
JC Brooks and the Uptown Sound at the Indie Rock Ice Cream Social in 2011.

Michael Tomko, the show’s organizer, announced the event’s return on social media at the end of June. He was buoyed by the positive reception. “It’s nice to hear they remember this niche thing. It pushes me to keep going,” he says.

The last ice cream social was in 2013. Tomko started organizing the event in 2006 when he was the manager and guitarist/percussionist for the band Gentleman Auction House. He later played guitar for the band Via Dove, which performed at IRICS for multiple years. In 2007, Tomko also co-owned The Bluebird, later called The Firebird, a Midtown concert venue that is now closed.

“Originally, the events were to push my own club or band further, but after 2013, I didn’t have either of those things going on,” Tomko says. “Life changed and other pursuits caught my attention.” Tomko’s daughter was born in 2014 and his software development job was getting more demanding.

Via Dove ultimately disbanded in 2015 and “my longest-running event An Under Cover Weekend [an annual concert featuring local bands playing tribute sets at Delmar Hall] went on hiatus in 2019.” Tomko also previously organized the Tritone Expo, a 2016 music and tech expo at Cortex.

Tomko is excited to bring the ice cream social back. He says he draws energy from creating “elevated experiences for bands and fans.” Reflecting on his event-running past, “While I don't expect to come back to doing events full-time again, I personally missed that energy in my life and realized that some of the things that I had prioritized over musical pursuits were ultimately not as fulfilling.”

Can we expect more events to return in the future? “Maybe [IRICS] is a gateway to bringing back some other of my local faves of the past — like An Under Cover Weekend — and creating something new for a new generation of fans also sounds rather appealing.”

Starwolf, YOUPEOPL, Jesus Christ Supercar and Amberskies are all performing at this year’s ice cream social. Tomko says the event and four-band line-up brings a “fuck-yeah energy” because it is happening in an intimate venue where the crowd and bands can feed off of each other.

Plus, the lineup is not “homogeneous, rather there’s representation for different areas of St. Louis," he says. The lineup includes neo-soul, punk disco, and psychedelic funk.

In the past, the ice cream social helped people discover bands they wouldn’t have known otherwise. “It takes a lot for people to spend money on a local artist, it's a huge accomplishment for the band.”

The enticement of free ice cream doesn’t hurt. The iconic desert speaks “a universal language which brings a whimsical, but familiar feeling,” Tomko says. “It’s like when you walk into a party where you don’t know anyone but see that one person you recognize.”

Serendipity Homemade Ice Cream has been hosting the free ice cream bar since the beginning, serving an array of custom flavors and toppings. In past years, there were fancy flavors like Salty Caramel, Irish Cream and Bordeaux Cherry. This year, while the flavors are still being decided, Tomko mentions guests can expect a “few staples alongside a few more adventurous flavors Serendipity is known for.” Tomko’s 8-year-old daughter is even involved in the decision-making process.

With the familiar treat in hand at a familiar event, Tomko is hoping the event just clicks. “When everyone’s off doing their own thing and having their own worries, this is the touchstone of familiarity that brings everyone home.”

Check out Indie Rock Ice Cream Social at Off Broadway (3509 Lemp Avenue, offbroadwaystl.com) on Friday, August 12. Doors at 6 p.m., and the concert starts at 7. Tickets are $15.