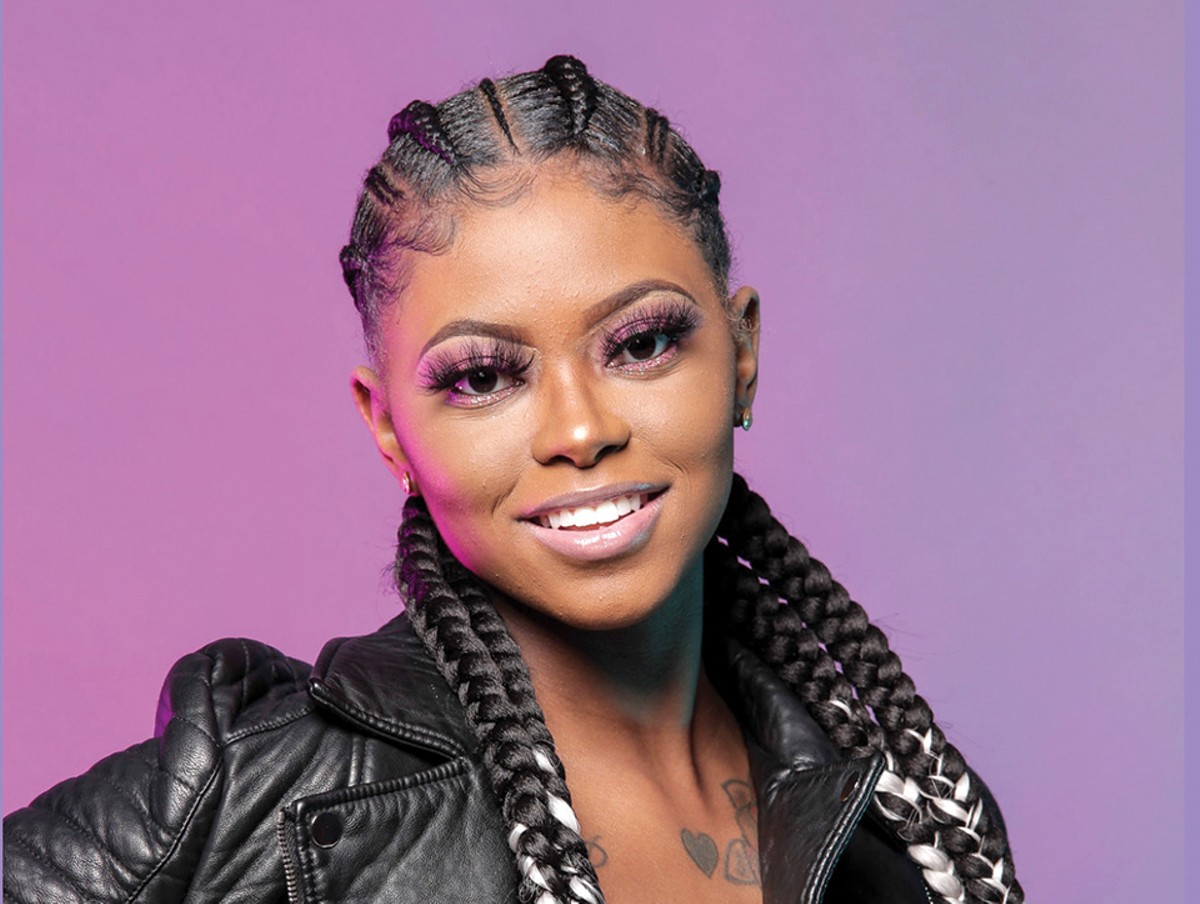 St. Louis rapper Yvette didn't set out to be an internet star, but now that she is she's taking full advantage. MONARCH PHOTOGRAPHY

If you think you're going to argue with a woman from St. Louis and win, think again.

It's almost certain you won't outsmart, out name-call, or have a larger catalog of insults to choose from than an STL queen. But one person in particular comes to mind when it comes to defending her space online. Enter Diamond "Yvette" Smith, a local rap artist whose knack for using social media has cemented her place in the clapback hall of fame.

Last month, Yvette uploaded a short video of herself to Twitter in which she participated in the "Practicing to ____" trend that was happening online. In her video, Yvette was pretending to practice throwing a drink on someone in the club. The video was hilarious and it instantly went viral, racking up more than 42,000 retweets and 190,000 likes. Overwhelmingly, the internet enjoyed it. As for the haters? Yvette took the time to respond to every single one.

Of all the exchanges that took place during that glorious Twitter thread, there's one that truly stood out.

"Do some of you ever get tired of being ratchet?" one user wrote.

"Ask ya mama, she taught me everything I know," Yvette responded with a smiling emoji.

Her experience going viral provided the perfect opportunity for Yvette to promote herself. Which is good, because not only is she quick-witted, she's also a budding entrepreneur and businesswoman. One user wanted to know about the jumpsuit Yvette was wearing in her video. Turns out, it came from the rapper's online boutique. Others wanted to know about her lashes and hair. Those also come from Yvette's businesses. And that's to say nothing of the following of fans she's amassed over the past few years with her music.

What makes Yvette's rise to popularity most striking is that none of it was planned. She wasn't an avid user of social media, nor did she have many followers on any platform. She never even truly planned on being a rapper; it manifested naturally.

"I never really thought I'd be this big on social media," she says. "When I first started, I was a regular person."

That all changed once Yvette started posting videos of her covers to popular songs. In 2014, she freestyled over Dej Loaf's "Try Me" and wasn't expecting anything to happen once it was online. Literally overnight, Yvette's video had gone viral. She woke up the next morning to more than 6,000 followers on Instagram, which continued to rapidly climb. By 2018, Yvette was being booked for performances, began traveling and started to take her music more seriously.

"I had that moment when I got my first booking," she says. "I was like, 'Whoa. Y'all actually listen to my music? You'd actually pay me to come see my music?'"

But transitioning into a rapper came with some hesitation. Yvette didn't want to be seen as a rapper, mainly because of all the criticism women in hip-hop face.

"I didn't want to be considered a rapper because I didn't want all the backlash," she says. "I never really labeled myself as a rapper. I just started to take things seriously back in 2018."

Yvette has the talent. She's amassed a following of listeners who enjoy her confident and alluring freestyles over instrumentals including Megan Thee Stallion's "Sex Talk" and Soulja Boy's "Donk."

Most notably, Yvette's single "Ratchet Twerk Song" exploded onto the St. Louis scene and across the web. It's a bold track, complete with direct instructions and the kind of sexual energy that makes one question their own zest for intimate relations. It's a fun song that speaks to the kind of music Yvette does best. She raps with a clever intensity that feels like watching two best friends lovingly insult one another. And it's hard not to like her, especially when Yvette uploads videos showcasing her smile while delivering venomous lyrics to fun instrumentals of your favorite throwback songs.

"I get it from everywhere," Yvette says of the inspiration behind her lyrics. "I could maybe be having a conversation with somebody, and I could say something funny that rhymes, and I'll think, 'Oh I could make that a song.'"

As her popularity increased, Yvette admits that she fell victim to the pitfalls of getting deeper into the music industry. Last year, the rapper says she signed on to a 360 deal that completely took advantage of her. She says she trusted management that insisted on getting her signed.

"Blindly, I signed a contract, and I didn't see it as a mistake then," she says. "But when it was time for them to start booking shows, that's when everything went downhill."

Yvette says that she experienced a loss of control of her image. She was being prompted to post certain content on social media, or encouraged to present herself in ways that were inauthentic. At that point, she wanted out. She realized all of the legal jargon in her contract was strategically placed. To most people, legally binding agreements are not simple to understand in plainspeak. Yvette covered her bases by having multiple people read over her contract, so that she did not miss anything. Unfortunately, she was duped into believing her management paid a lawyer to help seal the deal.

"The worst thing I ever did was sign a contract," she says. "For any upcoming artist, I will always tell them, 'Don't sign anything, you can do it all yourself.'"

And that's the kind of attitude that has fueled her success. Yvette is an entrepreneur with dreams of living the sort of luxurious lifestyle she's always imagined. She knows her audience and how to use social media to her advantage. More recently, she joined the website OnlyFans — but with a twist. Yvette decided to use the subscription-based platform as her personal vlog. She plans to create videos of herself giving inspirational chats, as well as teach her viewers how she started her businesses.

As a young woman with several talents, Yvette is also finally taking time to focus on putting out a proper music project. She hasn't decided whether it will be a mixtape or an EP, but she says she's excited to show her fans more of herself on her tracks.

"It's gonna be about my life, ratchetness, heartbreak — everything," she says. "We're gonna scramble everything into one."