On Saturday, August 17, the international music education chain, School of Rock (14560 Manchester Road), unveils its first locally-owned franchise in the St. Louis area with a grand opening event from 11 a.m. to 2 p.m. In honor of the opening, RFT Music decided to, ahem, research, some of the best visual interpretations we could imagine to get folks excited for its debut: Jack Black animated GIFs from the movie, School of Rock, and beyond.

But first, let's talk about what School of Rock sets out to offer to the community. According to Jordan Heimburger, general manager of the Ballwin School of Rock, the brand began in Philadelphia circa 1998. Since then, over a hundred locations of SOR have popped up all over the US as well as in Canada, Mexico and even the Philippines.

Heimburger, who has taught guitar and bass for a decade, is also a full-time performing musician who plays original music in groups such as the Incurables, the Feed and Cree Rider Family band as well as gigging with Celebration Day (a tribute to Led Zeppelin) and Street Fighting Band (a tribute to the Rolling Stones). 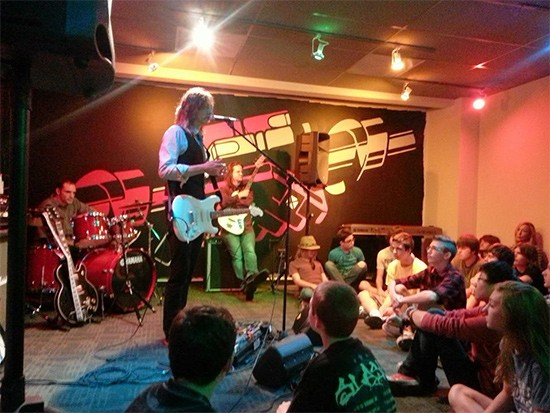 So what's the twist? What makes School of Rock different from other programs in the area? SOR's core program primarily aims to educate students aged 7 to 18 with a weekly lesson and weekly group rehearsal for a large-scale production -- in this case, a tribute to Pink Floyd's The Wall featuring all 26 of its songs and a British Invasion tribute featuring tunes of the Kinks, the Rolling Stones and more. Theoretically, a student can enroll at any time and get incorporated or "casted" into individual songs' roles such as leading instruments, back-up vocals and auxiliary percussion depending on his/her comfort and skill level at the discretion of instructors.

SOR has a house band made up of its most dedicated, high-achieving students who will perform in St. Louis on a more frequent basis at prestigious events like the Forest Park Balloon Race, says Heimburger. Students also get the chance to audition for a national all-star program to tour nationally at events such as Lollapalooza.

SOR currently has fifty or so students enrolled, with its projected first performances set for sometime in January. Its grand opening this Saturday, August 17 features a performance by SOR instructor Al Holliday and his band. For more information, check out the official website for School of Rock Ballwin.

Proceed to the next page to see the best rock-oriented gifs of Jack Black Tumblr had to offer!