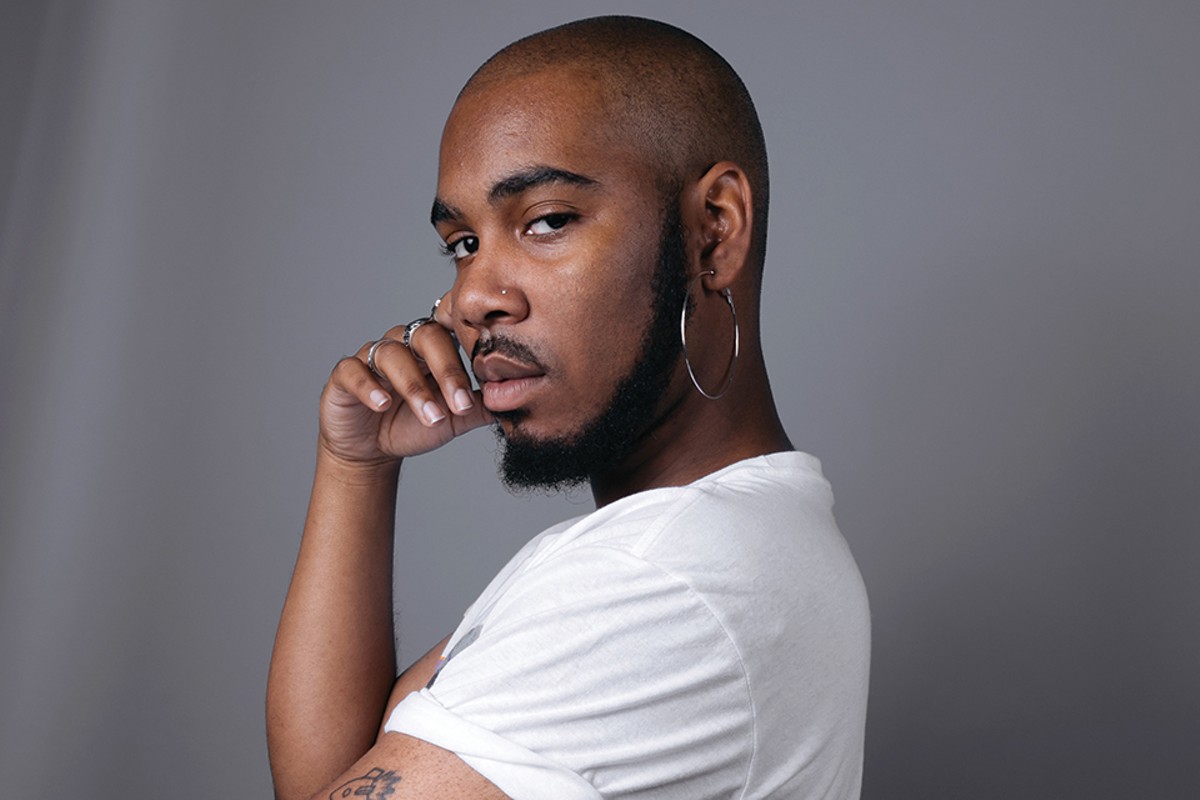 As an accomplished performer, director and teacher who even runs his own theater company, TreG knows how to put on a show. JESSICA J PAGE

January 4 is a characteristically brisk St. Louis evening, with showgoers filing into the Grandel in Grand Center to escape the cold. Inside, the historic theater is filling rapidly as the ushers direct ticketholders to their respective seats.

It's nearly showtime. All the rehearsals leading up to this special performance by St. Louis singer-songwriter TreG are in the rearview mirror — now is the time of reckoning. Will the audience be engaged, or leave at intermission? With theater, it's hard to tell.

As the curtains rise, TreG takes the lead role. Appearing confident and poised, the singer-songwriter dominates the stage, elevating what could have been a standard musical performance to a real work of art by giving his audience choreography, background dancers, polished vocals, wardrobe and precision. The singer, born Tre'von Griffith, is no stranger to the stage — this stage in particular, even. He's been performing since the age of six, with a resume that includes more than half a dozen productions here, back when it was home to the Black Rep.

All told, Griffith brings an energy that is unmatched in joy and authenticity to his performance. The show features tracks from his 2019 EP As I Am, along with performances from several like-minded St. Louis favorites including Katarra Parson, DJ HoodBunnny, Maxa and Eric Dontè.

As I Am is an EP rooted in self-love, freedom of expression and overall good vibes. It's a mix of R&B and pop, creating a sound that Griffith says "just makes you feel good." Each track flows into the next, giving listeners no opportunity to think about skipping ahead.

His music is filled with validating statements, complete with tender melodies wrapped in acknowledgement. "Fate has made a way, now I'm ready / 'Cause I'm full of all the changes surrounding me," he sings, gathering the audience at the Grandel into a captivating embrace. "Take Off," just one of the tracks from the EP, is a gentle ballad, expressing Griffith's openness to trusting where life leads him, including the shifts in his life.

Perhaps one of the biggest changes in Griffith's life came last year, when he married his longtime love. Among others, it was a moment that influenced As I Am.

"As I Am is just really personal to me," Griffith tells RFT. "I'm OK with being vulnerable, as well as the subject matter. For the first time, I just created what I thought in my head; I didn't think too much about what people would think about it."

As I Am, Griffith says, was the opportunity for him to create a body of work for himself, and draw inspiration from his life. He released the five-track project in June, following it up with a performance at STL Pride. In addition to the success of his own project, Griffith was also occupied with multiple shows from his theater company, TLT Productions. In his youth, Griffith attended Central Visual and Performing Arts High School and went on to graduate from Berklee College of Music. Since then, he's made his career in performing, directing and teaching — giving him all the tools and experience he would need to elevate his Grandel show to the next level.

It was indeed a packed year that led up to his solo performance. Griffith says the project has been a long time coming. From its inception, he says, he leaned on a team of trusted collaborators to create. From writing lyrics and cultivating melodies, As I Am was just as much of a team effort as it was a project focused on self.

"Earlier in my career, it was just me, and I wanted to do everything myself," Griffith says. "But as I've gotten older, I've gotten into collaboration. This was really about that."

With a strong background in music, Griffith says he was able to tap into his Rolodex of peers who also work professionally in songwriting. He enlisted the help of DreaVocalz, a St. Louis singer-songwriter that co-wrote "Take Off," along with several college friends for other songs on the EP.

As I Am is a letter. It's TreG's self-addressed piece, folded into an envelope and tucked away for him to read later. It's to remind both himself and everyone else exactly who he is — all of who he is. He's introspective on songs like "Take Off," he's giddy and basking in the glow of love on "Next to You," and he's living in truth on "Same Energy."

While he's not in a rush to put out a longer project just yet, Griffith says he's riding the momentum of As I Am. He wants to continue promoting this body of work before jumping into another, offering listeners the chance to get to know him. And if they aren't into it, he has one thing to say to that.

"Keep that same energy," he laughs.

Without skipping a literal beat, TreG performs all five tracks from his EP, along with an explosive cover of Usher's "Caught Up" and a splash of gospel, providing a glimpse into his musical roots.

As the lights focus on him, Griffith gives his audience studio-quality vocals without a drop in energy and emotion. Seated in the first row is his husband, Shelton, nodding along and singing every word.

Leading up to his performance, Griffith expressed his hope in garnering a positive response to his show. With barely any breathing room post-production and a standing ovation following the show's finale, it's safe to say TreG rocked the house.