The show will be a homecoming for the popular local act 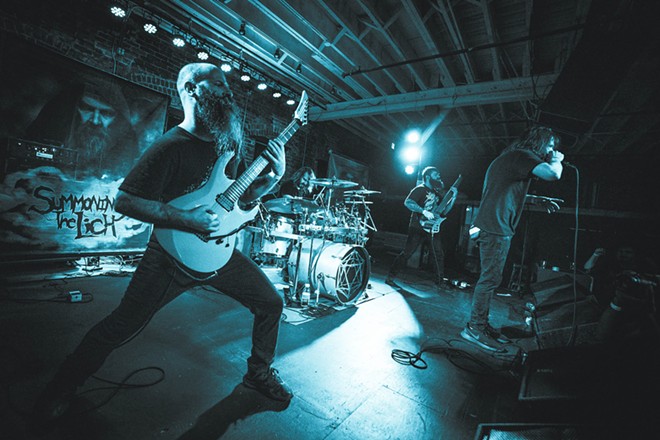 After spending much of the year on a national tour, St. Louis death metal band Summoning the Lich will return to its hometown this weekend for a special headlining event. This Saturday, November 12, Pop's will play host to the popular local band's big homecoming alongside a slate of supporting acts from St. Louis and beyond. The show's four openers were personally selected by members of the headlining act, who intend for the event to function as a showcase for some of their favorite local and regional metal bands.

"When we make a show, especially when we're in charge of the lineup, we want it to be all killer, no filler," Bruno assures the RFT.

Summoning the Lich is currently signed to Prosthetic Records, an extreme metal label founded in Los Angeles in 1998 that has served as a launchpad for many internationally renowned metal acts, including Lamb of God, Gojira and Animals as Leaders, all of whom released early material through Prosthetic. Summoning the Lich released its debut album United in Chaos in February 2021, and its members are preparing to record the second album in a three-record deal with the label. The band has been frequently compared to the Black Dahlia Murder, one of the most prominent melodic death metal acts in the United States and a primary influence on Summoning the Lich.

The show at Pop's will mark the second time the band has played in St. Louis this year. The group recently returned from a national tour supporting Allegaeon, a technical death metal band based in Denver. Saturday will mark Summoning the Lich's final live performance for the next several months, as the band's members prepare to sequester themselves in the studio to work on their forthcoming album. They will be playing most of the material from United in Chaos at the upcoming show, with Bruno hinting that they might debut some new material as well.

Polterguts, another local deathcore band with a considerable following, will be one of the opening acts at next week's show. Summoning the Lich and Polterguts have played many shows together locally and nationally, with members of both groups occasionally filling in for each other's bands on tours.

"They are like our brother band," Bruno says. "They're very important to us as far as a band in the local scene that we know is always going to deliver and [are] just really amazing friends."

Polterguts consists of vocalist and lyricist Martin Ruppert, brothers Justin and Brandon Riley on drums and bass, and Eric Pocheck on guitar. Like Summoning the Lich, Polterguts' members are all experienced performers who have been involved in the St. Louis underground metal scene for more than a decade.

"We all got into the Christian metal boom in high school around 2005, when bands like Underoath and Norma Jean were starting to get really big," explains Ruppert.

"I don't have anything good to say about them," Ruppert says. "Very controlling and scared of the real world. They were very focused on isolating us from non-Christian things or even Christian rock bands I was listening to. I guess one thing I can say is that [LRM] taught me the power of music and achieving unity and oneness under one roof. Everyone feels connected to what I used to assume was God, but at this point I've realized that music is just powerful, and it moves people."

Ruppert's skepticism toward his religious background is a heavy influence on Polterguts' music and lyrics.

"It's not anti-religion, it's more [against] the way religion has been used to keep people down," he explains.

Polterguts will be playing material from its 2022 album Gods Over Broken People, which was released in May and distributed through Blood Blast, a subsidiary of international metal label Nuclear Blast that focuses on promoting independent acts. The band recently returned from a 10-day stint of shows throughout Missouri and Texas, where its members performed with Cavil, a Spingfield-based metalcore act that will also be playing the Pop's show.

Cavil has connections to both Polterguts and Summoning the Lich, with members Kevin Brooks and Nils Seubold operating a screen-printing business that is under license to print Summoning the Lich's merchandise.

"They're very welcome in our scene," Bruno says of the band. "Part of the Lich family."

Also performing as part of Saturday's lineup will be The Behest of Serpents, a melodic death metal band from Canton, Ohio. As with Summoning the Lich, the group's sound is frequently compared to the Black Dahlia Murder.

"We can't wait to bring them to St. Louis and let people see them for themselves," says Bruno, noting that he has previously performed shows with the group in Ohio.

The fifth band on the show (and the first act of the evening) is White Rose, a relatively new St. Louis band whose sound Bruno describes as "nu-metal influenced, super low-tuned metalcore stuff. Real, real heavy and vibey." Each of the four opening acts will play a 30-minute set, followed by Summoning the Lich, who will play for 45 minutes.

"[It's] going to be an insane time with some of the heaviest of heavy bands that St. Louis and elsewhere have to offer," Bruno says. "A bunch of friends headbanging on stage together and hopefully a bunch of St. Louis fans and friends out in the crowd headbanging with us. ... It's what makes this music really special – it brings people together in a way that is different from other genres. ... Heavy music, the family element and the togetherness is second to none. There's no other genre in the world that has that kind of mentality."

"I think Summoning the Lich is the most proficient and tight band in St. Louis," Polterguts' Ruppert adds. "They constantly blow me away. Cavil is just a wall of sound, and people radiate off that energy. Polterguts is trying to be as heavy and technical as possible, but we're also just wanting to have a big wall of sound and bang some heads."

"We welcome everyone with open arms to come out and experience some brutal, pulverizing death metal," says Bruno.

Summoning the Lich plays with Polterguts, The Behest of Serpents, Cavil and White Rose at 7 p.m. on Saturday, November 12 at Pop's Nightclub, 401 Monsanto Avenue.