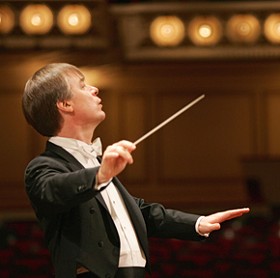 image via
David Robertson and the St. Louis Symphony will be back for another season.

It's still only about halfway through the current orchestral season, but the St. Louis Symphony believes in planning ahead. And so, late last week, the orchestra announced its offerings for the 2011-12 season, which kicks off in mid-September.

This year marks the centennial of Ballets Russes, the legendary dance company founded by Sergei Diaghilev and which featured the great dancer Vaslav Nijinsky. (Their relationship was kind of like Vincent Cassel and Natalie Portman's in Black Swan, only when Nijinsky went crazy, he believed he was a horse, not a bird.) The St. Louis Symphony plans to honor the Ballets Russes with a series of dance performances, including one to The Rite of Spring, composed by Igor Stravinsky, which the Ballets Russes troupe premiered in Paris in 1913.

According to legend, the Parisians were shocked by The Rite of Spring's radical modernism and showed their displeasure by rioting.

That probably won't happen when the Symphony performs The Rite of Spring to open its season on September 16, though a riot at Powell Hall would certainly be newsworthy.

There will be other dance/orchestral performances throughout the season to, in the words of music director David Robertson, "explore the provocative relationship between these two art forms."

The rest of the season will be the symphony's usual mix of classics that you probably remember fondly if you ever took a class in music appreciation (Beethoven's Fifth, Ravel's Bolero, Vivaldi's The Four Seasons), a two-weekend-long celebration of the works of Sergei Rachmaninoff, world premieres of new compositions (which probably won't cause many riots, either) and popular-ish music (such as the music from the video game Final Fantasy.)

Violinist Itzhak Perlman will pay a visit for the symphony's fundraising gala on October 1 and perform Bruch's Violin Concerto No. 1.

The symphony will also continue its film series by playing along with Looney Toons and Disney shorts, the 1939 documentary The City (score composed by Aaron Copland) and the 1925 silent version of Phantom of the Opera.

As it did this year, KWMU (90.7) will broadcast the Saturday night concerts.

You can find a schedule and further information on the symphony's website.