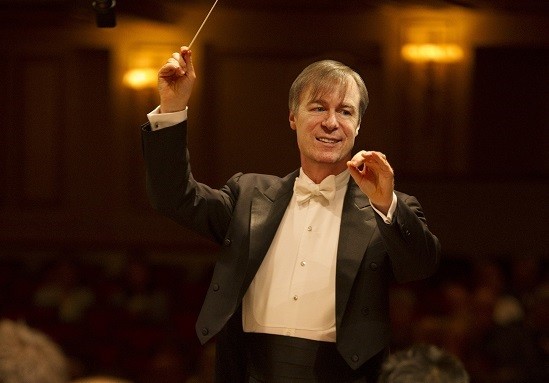 "If music be the food of love, play on."

William Shakespeare's words from Twelfth Night naturally mean something to us here at RFT Music, and by putting a spotlight on the Bard during the upcoming music season, it appears that the St. Louis Symphony feels the same.

"Music Tells the Story" will be the theme for the 2015-2016 performance season, the symphony announced at a special event on February 3. "Many of the season's selected compositions feature direct ties to great works of literature," SLSO writes in a statement -- including, of course, Shakespeare, whose works will be musically interpreted next February and March.

"I love the way that music can tell a story, either in partnership with real words or dispensing entirely with the words and partnering with our emotions," music director David Robertson says in a statement. "It can create atmospheres that allow our imaginations to go to places that, without the music, wouldn't exist. The works that we've assembled make each concert like a special collection of stories."

During a season full of pleasures, the symphony -- which may win two Grammys on February 8 -- will honor the 400th anniversary of Shakespeare's death by showcasing orchestral music based upon many of the Bard's plays. For four consecutive weekends, beginning February 19, 2016, the Symphony will perform Berlioz's Béatrice et Bénédict Overture, Mendelssohn's A Midsummer Night's Dream, Sibelius' The Tempest and Prokofiev and Berlioz's contrasting versions of Romeo and Juliet. During Tuesday's special event, Robertson hinted that actors from Shakespeare Festival St. Louis also will recite lines during selected works such as The Tempest.

"So much of music has come from Shakespeare," Robertson says.

Powell Hall will welcome a collection of elite soloists throughout the year, beginning with celebrated violinist Joshua Bell, who will perform Lalo's Symphonie espagnole during the season's opening weekend, September 18-20. Other acclaimed musicians slated to perform in 2015 and 2016 include pianist Orli Shaham, violinist Leila Josefowicz and saxophonist Timothy McAllister, who will perform a reprise of his portion of the Grammy-nominated City Noir recording on January 22 and 23.

SLSO also will continue its "Music You Know" series on select Fridays, including November 20, January 22 and April 29. As we reported in 2014, the series leads music lovers through famous classical pieces they may have heard outside of a traditional concert event. Robertson further enhances the audience's surprise by explaining the historical and cultural origins the music and why the pieces lend themselves so well to everyday use.

"The only thing you need to enjoy a concert of classical music is curiosity and attention," Robertson says.

Speaking of "music you know," the symphony will dredge up childhood memories by performing classical works based on beloved children's stories, including selections from Prokofiev's Cinderella, Tchaikovsky's Peter and the Wolf and Ravel's Mother Goose Suite. The series, which isn't just for the younger set, begins October 2-3. Families with and without kids also may enjoy holiday concerts like Handel's Messiah (December 3-6) and A Gospel Christmas (December 17), among others.

Sprinkled among these and other offerings will be orchestral favorites such as Gershwin's An American in Paris and Holst's The Planets, as well as another return for the Live at Powell Hall series. Previous series performers have included Ben Folds and Indigo Girls as well as symphonic tributes to rock icons like the Rolling Stones and the Beatles. Of course, the St. Louis Symphony also will continue its weekly broadcast on KWMU (90. 7 FM) and its monthly television series with KETC-TV (Channel 9).