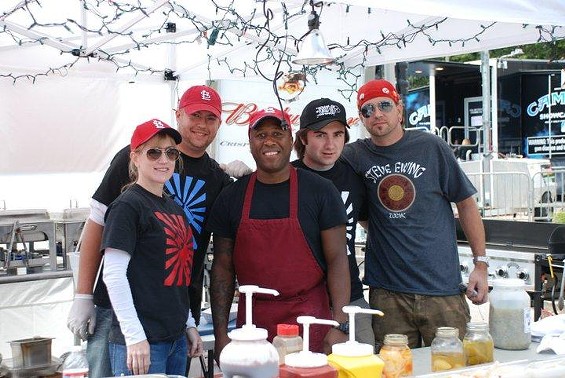 Have you ever considered writing a jingle for your cart? (Laughs) You know, when we get into television advertising, I would imagine I'll have to. Without a doubt. The cool thing about St. Louis is there's so many great ways to market at the street level. The community is kind of small in a sense, and I've been a public figure in the community for so many years. So I don't have to go crazy with television advertising. I can really do a lot of word of mouth and things like that. For food, for what I'm doing it works out great that way. I get a lot of repeat customers.

By the same token, do you ever play your CDs at your hot dog stand? I do, just for a little while cause sometimes I get tired of hearing it. My daughter, that's what she wants to hear in my car, so I hear my music all day long. During the rush, I'll put on the oldies station or something like that. Earlier in the morning, we'll play Steve Ewing music and people will come by and be like, "What's that?"

One thing I should ask, because you sell hot dogs: Aren't you or weren't you at one point a vegetarian? I still am, and we do veggie items. We have a vegetarian meatball sandwich and we also have veggie burgers.

So you don't have any moral qualms with selling something you personally wouldn't eat? No, I don't have any problems with that at all. That's not the reason I'm a vegetarian. I love meat, I just chose not to eat it because it got hard for me on the road, touring and stuff and it was kind of easier for me to discipline myself that way and keep myself healthier while I was on tour. And I just kind of kept going with the lifestyle. But occasionally I'll still eat a few things here and there. I'm not a strict vegetarian.