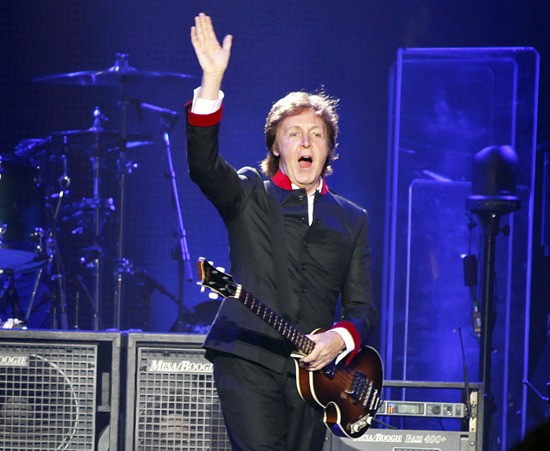 In case you missed it, at the start of this year Kanye West released a new track, "Only One," on which he collaborated with Paul McCartney. Like all events in popular culture now, conversation about the song began popping up all over Twitter. Some of those tweets (among the likely millions posted about the release) entailed comments from people saying they didn't know who McCartney was.

And then the backlash, in the form of indignant bully rants about the death of music, began.

Sensational-for-no-reason headlines like E! News' "These Kanye West Fans Don't Know Who Paul McCartney Is, Which Means All of Society Is Doomed" and USA Today's "Genius alert! Kanye's fans thank him for discovering 'unknown artist' Paul McCartney" began popping up all over the Internet.

Now, I'm not a fan of West or McCartney's work, so I hadn't bothered to click a single link when the collaboration news appeared. But it was this taking to task of younger listeners that got me more pissed than the thought that anyone wouldn't know who McCartney was. Because really: How dare you decide who in music history is important to whom?

I personally don't care for the Beatles (I know -- gasp that last breath of disbelief, but people like me do exist), but this situation isn't about liking or not liking the Beatles at all. It is about shaming people for not knowing something others deem is important. Yes, the history of modern music is important to me, and for those who choose to go further than surface listening and find themselves engaging in conversations about music, yes, context is important. But who chooses the context when we are talking about art? And besides, I'm pretty sure that in this situation, these select few Kanye fans were not looking to have a discussion with any Beatles-splainers. They were just tweeting.

There is so much entitlement ingrained in what is known as "popular music history," something that doesn't seem to bother the people who look like that music history. What I'm saying is, I love art made by white dudes just as much as the next guy, but you know what? That's not my music history. Yes, I am fully aware of how many millions of records Paul McCartney and the Beatles have sold, how many barriers they broke when it came to incorporating non-traditional musical and cultural (some would argue appropriated) elements into popular music, the worldwide still-thriving popularity, etc.

The story continues on the next page.