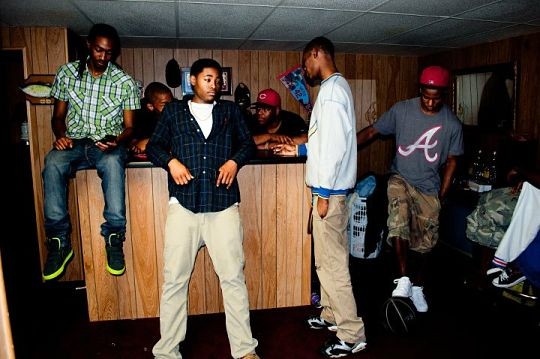 Courtesy of AceDeuce
Adrian White stays stoic in the center of this photo, taken for the release of N.O.D.I.C.E.'s recent mixtape.

In this week's print issue, we caught up with seventeen-year-old producer Adrian White (AceDeuce) in the living room of his North County home. We told you about his beats (visceral), his home life (suburban) and his future plans (busy but vague). But we didn't let you hear him yet.

The young producer's efforts to increase his brand are almost entirely focused on the online musical environment, where you can hear his latest project, a mixtape he produced for his friends and classmates in rap collective N.O.D.I.C.E. (New Original Dudes in Charge of Everything). The fourteen-track mixtape, called Basements to Billboards, is available to stream or download for free at stlmixtapes.com through this link, and it has received a slow but steady stream of attention since its July 7 release date online.

White spoke with us about his hopes for the collective, one with an acronym only slightly shorter than LA youth collective Odd Future Wolf Gang Kill Them All. In between serious talk about the "trickle down" effect of popularity in the Midwest, White spoke about the drive to create a reputation online.

"N.O.D.I.C.E. has to take to the Internet in order to bag a healthier name because that's where all the potential is," White says. "If you can make a name there, you can eventually take your name away from the Internet and still have it mean something. The only way I got anyone to care about me at all in the beginning was by collaborating with other artists on websites like that."

For more information about the teenage maestro, check out his Tumblr page, where he links to both his inspirations and his own work. A recent entry finds him streaming N.O.D.I.C.E. track "Ass on Wheels."