Summer Obsessions: Foxygen's Latest Might Be the Best Album So Far This Year

I have an unusual music source. His name is Baron and he came to the United States in his late teens as a foreign exchange student from Germany. Although his homeland's biggest contribution to American music is probably when Nena floated to number two on the Billboard chart in 1983 with "99 Luftballoons" and its translated sibling "99 Red Balloons," Baron has tremendous taste in music. We were chatting about music one day, as we often do, and in his still-thick German accent Baron said to me: "You must check out Foxygen - I play it on repeat." Knowing he would never steer me toward beer festival style Oom-pah polkas or raucous heavy metal like Defeated Sanity or Heaven Shall Burn, for which his homeland is best known today, I took that recommendation and ran with it. Suffice to say: Baron, you have done it again. 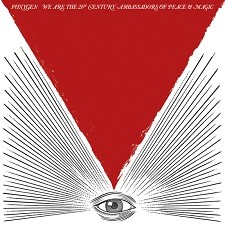 Jonathan Rado and Sam France clearly depleted their skill in coming up with clever, pithy names when it created the duo's fantastic moniker, leaving us with the clunky We Are the 21st Century Ambassadors of Peace & Magic as the name of its second album. The music strongly belies the unwieldy title, playing like a 36 minute breath of fresh air, a beautiful album that, like grilled Chilean Seabass, could be best enjoyed outdoors on a summer evening with a crisp citrusy sauvignon blanc. Far too many varied styles and influences permeate 21st Century Ambassadors to fit Foxygen neatly in a box, but it can be most closely grouped into the psychedelic revival with bands like Tame Impala, MGMT and Pond.

Rado and France, a pair of 22 year-olds from Los Angeles, have clearly spent much of their limited time on Earth studying the musical styles of the late '60s and '70s, incorporating church-style organs, chimes, flute, clapping, piano, repetitive female accompaniment and even doo-wop into a masterful concoction where not only do no two songs sound alike, they hardly sound like they emanate from the same band. Many artists are similarly drawing from the staples of yesteryear, so what makes these chaps different is the way they practically occupy the era, going far beyond dropping the occasional reference -- they could just as easily have written these songs while sitting cross-legged around a hookah and complaining about the Nixon administration. Foxygen doesn't just evoke the easy themes of the time - peace, love and understanding, it delves deeper into the political and social mores of the era. Lyrics don't just obliquely mention "the war," but talk to "my grandma who lost her arms in the war," singing not just of the heavy drug use, but of "smoking pot on the subway." It is that level of detail that makes the band authentic, not just a couple of posers who once watched a Woodstock DVD.

Aside from the fact that he possesses actual musical talent and has no interest in winning a karaoke contest that wastes hundreds of millions of American hours, France would be a shoo-in for American Idol or The Voice, as even someone with a tin ear can easily point to several spot-on homages to the prominent singers of the era. On "No Destruction," he gives a Bob Dylan impression that four actors and an Oscar-winning actress couldn't match in the movie I'm Not There. If you close your eyes during "On Blue Mountain," you can practically see France doing a rooster walk and wagging his finger at the crowd while wearing 24-inch waist pants and somehow getting his words to pass through the world's biggest lips. The listener is even treated to a credible Elvis Presley impersonation in the title track.