"Support Original Things": Jack Buck's Advice to New Bands Based On Its Experiences 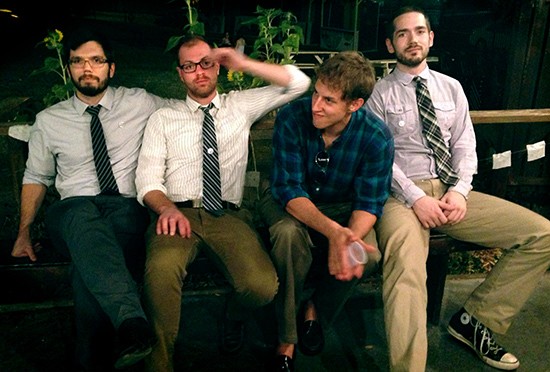 In this week's music feature, RFT Music talks Jack Buck, a noisy St. Louis rock band that, in its three-year tenure, put out two memorable records and made a racket on every stage that it hit. Check out the full write-up on Jack Buck, plan on catching them one last time tonight during their last St. Louis show and keep reading for some interview outtakes about the band's lessons learned.

For a slightly abridged depiction of the band's history, refer to bassist Michael Gerhardt's description via the band's social media pages, unedited: "In summary: Jack Buck is a freight train made out of jagged bits of rusty metal detritus that you'd normally find in a forest that is operated by a man who refuses to learn how to use more modern detritus-based freight trains because he's stuck in his ways and doesn't want to embarrass himself if he was placed in a different situation and frankly no one needs to take his dignity like that."

That said, we wanted every bit of wisdom we could get from these guys. Read below as we prod them for useful bits of knowledge for bands based on their experiences.

RFT Music: What sort of advice do you have to impart to bands in St. Louis after your experiences in Jack Buck?

Chase Macri: For the first several shows, we didn't really know what it was going to be. One of the problems I see with bands sometimes is that they get up there and make a really big deal about stuff, and if it doesn't go well, they're really discouraged. People in general respond a lot to how they're received, which I think doesn't really matter that much. If you're just getting out there and playing music that's important to you, that's great, because you have to suck before you're any good.

Chase Macri: When you get out and play live, it's different because it's not the same reverberations as the practice space. It feels different and looks different. Everything is weird. When you can work with other people and anticipate what they're going to do when they perform, that's when you start to get really comfortable playing shows. Part of the reason I don't get nervous anymore is because I know what to expect from bandmates and know things to avoid. There's maybe some kind of fear. You have to get up there and suck and say "OK," and then you'll be good if you keep putting the work in.

Colin Webb: Work hard. Make sure that your songs are tight before you're willing to play them live. There's no rush. That was the cool thing about this band as opposed to other bands: there was no rush to play. We practiced a year before we played. I think it's something a lot of bands do. They get their band names, they get some songs written and go play a show. And sometimes, I think maybe they should've waited another six months and taken their time.

Chase Macri: I would like for bands to stop being so obsessed with being -- making a lot of sound, having a lot of amps and being loud for the sake of being loud. Being loud doesn't mean you're heavy.

Daniel Ruder: Ironically, we're very loud! It's easier to get things going and be relaxed when you have equipment that works. For every band like Unwound that plays shitty instruments and sounds incredible -- that's one in a million. It's a lot easier when you sound like you want to sound like. That's something you literally have to make a million mistakes with before you get it right. I don't ever expect 17 or 18-year-olds to sound good. You might have nice equipment, but it takes awhile to figure out your aesthetic. Work hard. Be patient. We took as long as needed to make stuff as good as we could.

Also, I think it's insane to have any interest in sounding like anybody else or be like anybody else. To me, that's missing the point. When it comes to recording, of course you can have rough outlines of what you think it should sound like. I think it's the wrong approach and harmful to art and music in general. Support original things.