SXSW 2015: Friday and Saturday Recap with the Church, Juliana Hatfield, the Zombies and More

"There's no use in wishing and hoping," chanted poet, songwriter, actor and Native American activist John Trudell. He stood with his band in the sanctuary of a church in the final hours of SXSW 2015. "No use in coulda, woulda, shoulda. It's a waste of tears."

"He is extremely eloquent," the FBI once noted of the 69-year-old visionary and onetime leader of the American Indian Movement. "Therefore [he is] extremely dangerous."

In Austin, Texas, this past week, the eloquentia of music was everywhere, in every imaginable way, if you only listened hard enough through the din of propaganda, poseurs and the pessimism of the cold rain -- it was South By's worst weather in my sixteen-some years of attendance -- that yet couldn't cleanse the bacterial incubator that is Sixth Street at midnight. The marquee hip-hop acts -- J. Cole, John Legend, Run the Jewels, Travis Scott, YG and of course Snoop Dogg -- spoke out to the 300,000 (that's not a typo) who descended on the ten full days of SXSW this year. For its part, Songhoy Blues, a rising Malian blues-rock-funk band, communicated in a language no one and everyone and their asses knew.

Ditto for Ibeyi, Yoruba for twins, the sisters Lisa-Kaindé Diaz and Naomi Diaz, who were more than a highlight of my SXSW 2015. They were as eloquent in their French and Afro-Cuban song poems, looped and chorded and thumped on a cajon with a freshness that restores hope and faith and, to quote John Trudell again, intelligence to this dizzying, mind and liver-numbing beast that began in Austin 28 years ago.

Over the course of five days, I took in a conservative estimate of 50-odd bands, counting only those that persuaded me to surrender more than fifteen precious SXSW minutes. Musical and free-booze quantity is the dumbest reason to attend, but quantity is also part of the story. The ever-expanding confines of this capital city offer a panorama of the state of popular music today that would be unimaginable without it. Idle talk by city-planners and consultants of moving the event is just that. For better or worse, SXSW built the Austin known to the world today.

Standing in the rain outside Waterloo Records on Friday afternoon, I let Aussie band Twerps begin my round of day parties with a short, modest but fetching set of indie pop, followed by Ibeyi, who apologized for the rain, and then charmed the rain-ponchoed crowd into keeping time with its grooves. The twins are nineteen. Who can say what will happen to them in the coming years; I can say they have a joy and talent that just might inure them to all the bullshit. 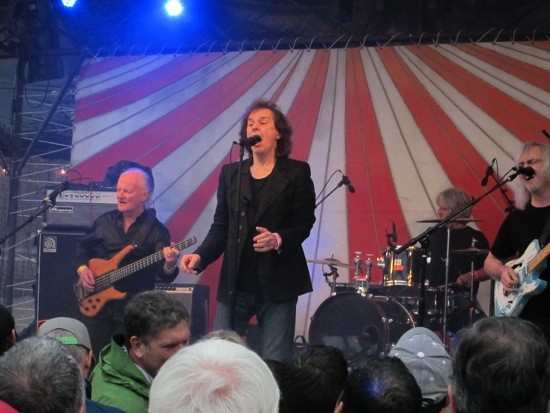 Roy Kasten
The Zombies at South By San Jose

Outside the San Jose Hotel on South Congress, the rain finally let up on Friday for my first live encounter with the Zombies. Rod Argent and Colin Blunstone still lead the band that scored its first hit in 1964, and they can still make magic on stage. Blunstone, especially, sang his 70-year-old body out, and the jazzy progressions and melodies of "Time of the Season," "Care of Cell 44" and "Tell Her No" were pristine.

By nightfall on Friday I returned to one of at least four churches that host SXSW events. Those spaces are reason enough to come to Austin in the spring (though the now-ubiquitous T-shirts that read "Austin: Don't move here" are eloquent enough), and the fact that Laura Marling was performing a full set in one meant not only seeing her for the first time but seeing her in the finest way imaginable. With a blanket draped across one shoulder, Marling seemed a bit tired and struggled with a few songs, but she still drove home the best of her withering confessions with the furious, intricate acoustic guitar work of a punk Joni Mitchell.

Coulda, woulda, shoulda. That's how I felt about seeing the Church, or what is left of the Church sans Marty Willson-Piper, in the 500-person capacity Buffalo Billiards (not that fire code was enforced). If the band wasn't having a disastrous SXSW it coulda fooled its audience. We endured a truncated set (late start, shit for sound) of dirge after dirge without a single recognizable hit. Steven Kilbey ended the fiasco on Sixth Street by nearly face-planting after tripping over his instrument cable. The next day the band would join the chorus of outdoor show cancellations and bail on its headlining gig at South By San Jose.

I ended Friday night back at the billiards hall to see the Juliana Hatfield Three storm through a moving and impressively tight set that reminded a good crowd of why she is a trailblazer, and why songs like "Feelin' Massachusetts" and "President Garfield" and "I Got No Idols" define the dark, honest eloquence of alternative rock. Though she looked gaunt, as if she hadn't slept (or eaten) in days, she delivered one of the most powerful sets of the week.