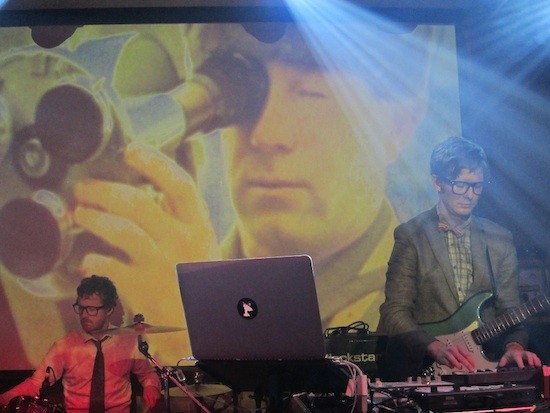 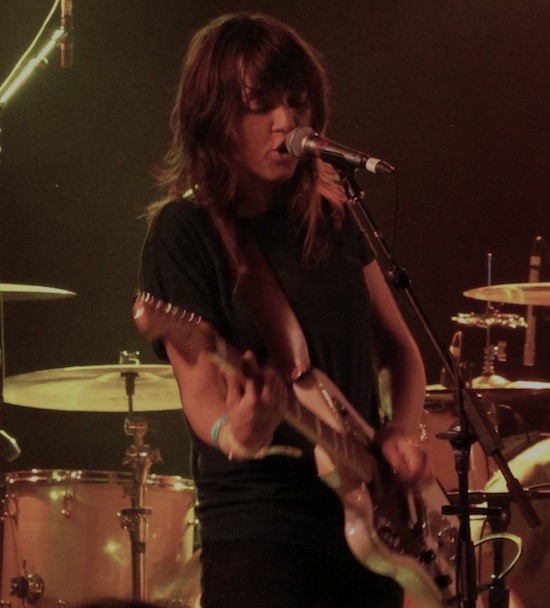 Nashville's Bully played beneath the canopied stage at Billy Reid's party with a sound far grungier and angrier than the band's initial efforts. Singer Alicia Bognanno leaned into each song, her tangled mass of home-dyed hair nearly catching in her guitar strings, and her band just hammered each tune home. Gill Landry of Old Crow Medicine show worried not about transitioning out of Bully's rock; he just set out his solo acoustic, country & Western and blues ballads, with a voice and lyrical knack that suggests that his solo explorations know where they're bound. The sound he gets from his old, small-body Gibson is both beautiful and oddly muscular, an excellent counterpoint to his tales of buskers of New Orleans and "faithless men drinking gin."

Still on Wednesday morning, I took a break from east Austin to head across town for the annual Guitartown/Conqueroo party at Dogwood, where Ray Wylie Hubbard, son Lucas Hubbard and drummer Kyle Schneider found a groove that you really could hammer nails with (to quote Ray Wylie himself), debuting new songs from the Texas native's forthcoming album The Ruffian's Misfortune, his latest and meanest venture into the blues poetry of rock & roll. Don't miss him when he comes back to St. Louis in May.

Back at the Billy Reid party (you too would have returned if you'd have sipped those deep pours of vodka), BRONCHO got twitchy and Clashy and incoherent-y, at least in the lyric-y department, but who needs to understand a word when you've got a wordless chorus as catchy as that of "Class Historian?"

"Anybody got some gum?" singer Ryan Lindsey requested. Someone in the crowd obliged, and the phrasing got even more twisted.

But I'd come to this Wednesday day party for Natalie Prass, a protege of Matthew E. White and the Richmond-based Spacebomb studio, whose self-titled debut this year is a beautifully skewed take on Dusty in Memphis and who -- now that we've shared a moment (she gave me a rose; I gave it to this assignment's photographer) -- I can say is so much more than a studio confection. Witty, outgoing and tartly soulful, Prass had the crowd right where she wanted them and right where the crowd wanted to be.

For me, the Wednesday evening showcases began at the Central Presbyterian Church, where Chicagoan Ryley Walker filled the nave with gorgeously droning folk-guitar journeys, all punctuated by his tuneful yelp of a voice and a second guitarist and piano player who complemented the Tim Buckley meets Tim Hardin vibe. Walker even ended with "If I Were a Carpenter," a song that he is right in thinking will never die -- especially when covered so well.

After Courtney Barnett's triumphant set at Stubb's, I took a chance on a crosstown gig by Icelandic folk-pop group Kaleo at the SEASAC showcase at Lambert's. There are no take-backs at SXSW, but this was a precious hour of my Austin week that I'd very much like to have back. If I could have gotten past the lead singer's tooly presence, from his gelatinous hair to his ripped jeans, I might have made my peace with what Iceland seems to think Americana ought to be. I couldn't. Scratch Kaleo from the-next-Lumineers hype list.

The end of the night was only redeemed by the Suffers, a ten-piece (or more, I was too buzzed to count) funk band from Houston, with an imposing lead singer in Kam Franklin, and some clever horn lines and a good conga player. Holy Mountain's indoor room had become my kind of dance party.

If the name Kristin Diable doesn't ring any bells, just a wait a few days. She'll be at Off Broadway on March 25. If you're in the mood for blue-eyed soul with well-considered tunes and precise but still loose arrangements -- part Laurel Canyon, part gospel -- you'll want to make a date with her. In the confines of an Episcopal church in downtown Austin, she made for a gorgeous first impression, especially on a final, a cappella trio number.

I closed out Thursday night in just one location: the British Music Embassy at Latitude 30, an institution at SXSW. Black Rivers, featuring two-thirds of the Doves, began with a Doves tune sung by Jez Williams, who handled most of the lead vocals on the short but quite pretty set. The droning, spiraling sound still had enough hooks to hold my attention, as did a fuller set from newly formed Liverpool upstarts Circa Waves, who played well above their haircuts with nonchalantly charismatic frontman Kieran Shudall and tunes that owe as much to the Kinks as the Strokes.

Closing out Thursday's Brit Music event -- the always worth attending parties continue through the week -- were Carl Barât and the Jackals and Public Service Broadcasting, a study in contrasts that worked. Barât, Pete Doherty's sane foil in the Libertines, wailed, "We're not afraid of anyone!" and it sounded less like a boast and more like an invitation to surrender to the band's spirited and relentless punk rock. The drummer ripped off his shirt after the second song, and Barât gave every song everything he thinks rock & roll can be -- in sum, a sweaty hell of a lot and a sweaty great time.

Public Service Broadcasting, if you haven't heard by now, consists of the uber-nerdy London duo of guitarist, loopist J. Wilgoose Esq and drummer Wrigglesworth. Think Primal Scream remixed with an arsenal of surf guitar, banjo and film and voice samples from British propaganda films and other archival footage -- often from WWII, Mount Everest expeditions and the Space Race. If you're having a hard time getting your mind around that, so am I. I'm still reeling from how much wit and history and vision and groove this band, maybe the best I will see at SXSW 2015, conveyed in 45 minutes. Travel any distance to see PSB soon.