Hating on South By Southwest is too easy. Just look around: Shit-faced lawyers waxing bizness gobbledygook to shit-faced salesmen of exercise bikes, members of psych-metal bands (probably called Red Octopus or Purple Cobra) barely remaining vertical for all their unbathed rock studiousness, the endless fail of precious band names (This Will Destroy You vs. Swimming With Dolphins vs. Snowbyrd), video game developers fuhreaking out over a Bill Murray sighting, career journos who will write caption fluff for a badge, and indie kids, so many indie kids, wasted on free SoCo and Sobe before sundown.

Lead us not into the temptation of misanthropy. There's music to save us all.

A late start on Thursday, Day 2 of South By Southwest 2KX, found me at the KDHX and Twangfest day parties at Jovita's Restaurant. (Disclosure: I'm a KDHX DJ and Twangfest volunteer.) Now in their eleventh year, the parties have a rep for being one of the few places where Americana, folk and rootsy rock have a stable home at South By, and the relative old-timers (anyone over 35) can see bands who aren't influenced by Tears for Fears or the Arcade Fire.

I caught the tail end of a warmly received Glossary set on the outdoor stage. A recent deal with Lucero's record label seems to have kicked the band in the pants; they played loose and a little wild, comfortable in just rocking. After that set, much of the crowd moved inside for Texas outlaw legend Ray Wylie Hubbard, who played a sometimes hilarious, sometimes poetic, always deeply blues-driven set, backed up by one of the best drummers in Austin (veteran Rick Richards) and 16-year-old son Lucas Hubbard on fiercely blue Les Paul Jr. tone stabs.

The twisted old-time country of Gordon Gano and the Ryans followed, with Jerry Harrison (the producer and Talking Head) standing by for moral support. Jovita's was packed all afternoon, and though I missed 3/4 of the bands at the party, the day seemed to go off without a hitch. The parties return for one more afternoon on Saturday. 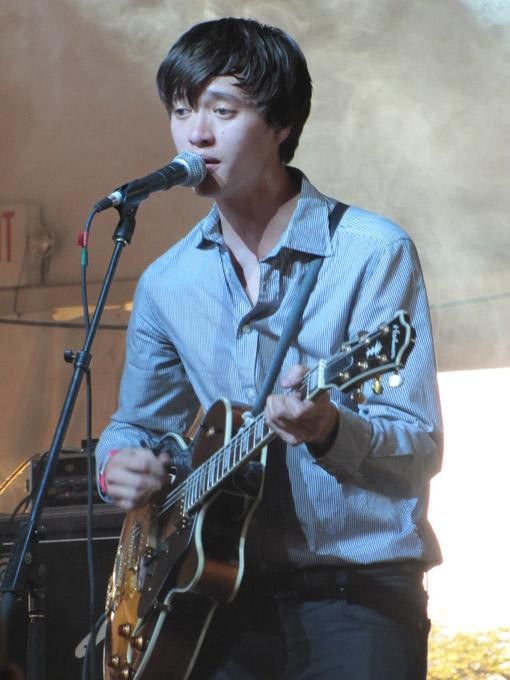 After pancackes and grilled cheese at Kerbey Lane on Lamar Blvd. (one can only take so much Tex Mex), I scrambled back to the east side and the Levi's Fader Fort, catching the last half of a buzz-worthy show from Berkeley, California band the Morning Benders. The mix of dance rock and fuzz rock was just right, even when singer Chris Chu indulged in a bit of Korean-American karaoke showboating for final song "Echoes," which slid from slo-core doo-wop to full on Acid Mothers Temple fall-to-the-floor guitar flame out.