Roy Kasten
Otis Gibbs
Saturday afternoon at SXSW 2009 started early this year, with the second of the 10th annual Twangfest and KDHX parties at Jovita's (disclosure: I'm a KDHX programmer and Twangfest volunteer), and Nashville-based songwriter Otis Gibbs, whose protest sing-a-longs, earthy folk and best beard at SXSW have more of a following in Austin that I would have guessed.

The small crowd at the outdoor stage bonded with the singer, which only made me wonder how the relatively unknown Minneapolis band Romantica would fare. Fronted by Irish-born singer Ben Kyle, the group plays sly singer-songwriter country folk, sly because no one expected Austin-born violinist and singer Carrie Rodriguez to sit in, and I definitely didn't expect the band to hit the noise, Americana-style, as hard as they did for their final number.
Chicago's Steve Dawson of Dolly Varden followed with a gorgeous new song "Obsidian," a pitch-precise George Jones cover and then duetted with friend Edward Burch, formerly of Champaign, Illinois, but now based in Austin. Both are strong enough singers and songwriters to hold a sun-soaked crowd with just voices and acoustic guitars.

Roy
John Henry and the Engine
Two of three St. Louis bands on the bill, Magnolia Summer and John Henry and the Engine, followed by turning up the volume, the former with a relaxed, electric set of numbers from Lines from the Frame, and the latter with organ, lap steel, and great harmonica from Henry. The cover of the Beatles "One after 909" featured three-part harmonies, and I suspect the band found the 14-hour drive nearly worth its one and only showcase in Austin. (Like a hundreds of bands before them, they had their van broken into in Tulsa, but fortunately only electronic devices were stolen.) 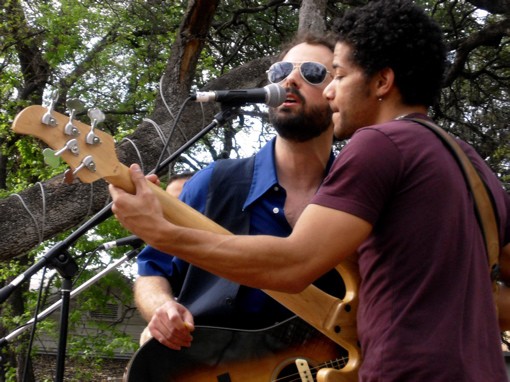 Roy Kasten
Brothers Lazaroff
Brothers Lazaroff were the third St. Louis band of the afternoon, and they had the tightest rhythm section, playing a short, country rock set of originals and a Townes Van Zandt cover, "White Freightliner," to close out.

Roy Kasten
The Deep Vibration
The final band, Nashville's The Deep Vibration, overcame the silliness of their name, with the best version of Dylan's "Shot of Love" I've ever heard (including the author's), and elliptical and intense blues and country structures, that singer and songwriter Matt Campbell sliced and bled with a cool razor of intelligence and wit. They played loud, loose, and beautifully, wrecking the small stage at the end: it was easily the set of the afternoon.