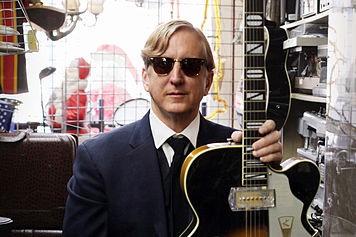 kevchino.com
On this day in 2009, T-Bone Burnett won a ton of Grammy Awards. Maybe not a ton, but a lot.

Award season has been very, very good for T-Bone Burnett. The musical impresario has won just about every conceivable honor over his decades-long career, from a Golden Globe to a BAFTA Anthony Asquith Award. Heck, Burnett is only one Rugrats sequel away from capturing a coveted Nickelodeon Kids' Choice Award.

But this week probably holds a special place in Burnett's heart. Six years ago on Saturday, Burnett won a Grammy for his producing work for the Walk the Line soundtrack. That's not too shabby.

But then on this day in 2009, Burnett scooped up Grammy Awards for Album of the Year, Record of the Year and Best Contemporary Folk Album for his production work on Allison Krauss & Robert Plant's Raising Sand. To top it off, Burnett also won an award for Best Traditional Blues Album for his work on B.B. King's One Kind Favor.

Although he was raised in Fort Worth, Texas, the St. Louis-born Burnett has to be one of the most highly decorated musicians from the Gateway City. He has won a total of twelve Grammys during his career, most recently for his work on the Crazy Heart soundtrack.

Burnett has also joined prestigious artists like Lionel Richie and Three 6 Mafia in winning an Academy Award for Best Original Song. He earned that distinction for his work in producing "The Weary Kind" for the Crazy Heart soundtrack. The Jeff Bridges-fueled film relied heavily on music, so perhaps Burnett should get some credit for the Dude's Best Actor Oscar as well.

Burnett is more than just an award-grabbing robot -- he's paid his dues. He toured with the consummate singer/songwriter -- Bob Dylan -- back in the 1970s. He's also released a number of critically well-received solo albums.

But Burnett's behind-the-scenes work has been his bread and butter, so to speak. In addition to producing a number of soundtracks, he's also done work for artists such as The Wallflowers, Counting Crows and Elvis Costello. Most recently, he helped produce Gregg Allman's Low Country Blues.

While Burnett may not take home any Grammys on Sunday, it's not beyond the realm of possibility that he'll be back to grab some more mini-phonographs sometime in the near future.