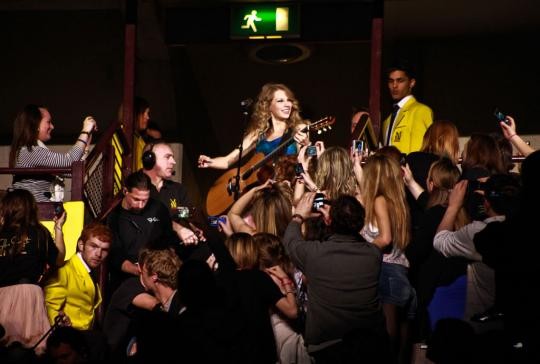 Communing with fans: One of many ways Taylor Swift is a superior pop star.

Let's get one thing out of the way: I am not a teenybopper. Never was. As a kid I never liked Grease or New Kids on the Block or Dirty Dancing. Even now, I can't give a crap about your Biebers or your Mileys. And how in the hell anybody likes Glee is beyond my comprehension. But, OMG, I totes hearts Taylor Swift, y'all.

Her whole damn thing is fabulous: She writes her own songs, she's super-involved with her fans, she's hilarious in the press, she never uses her sexuality to sell herself, she's only 21 years old and she's holding down a massive tour all by herself. (Eat shit, U2.)

And though her squeaky-clean image is a selling point for many a parent, it's a turn-off for tons of potential fans. If you're not used to dealing with cutesy pop stars, it can be kinda hard to get past her pretty, pretty princess act. Yes, she's a product, but Superstar Swift is more than just a money-making business construct. I have no doubt that talent and ambition were key factors in getting her where she is today.

Because she is a hard working, song-writing, Grammy-award-winning, powerful young woman, Swift absolutely qualifies as a strong female role model. Yes, she's a totally "safe" option when it comes to female empowerment, but hey, I'll take it. I have little sisters and I'm stoked whenever there is any girl for them to look up to who is not a total trash whore.

So gag on her vanilla-ness all you want, but they can't all be shit-disturbers. That isn't something we look for in a tween idol and there haven't been many popular options for this generation. Madonna is the longest standing icon, but she's always been too wrapped up in controversy to get a parental pass. It wasn't so long ago that the Spice girls were pushing prepackaged Girl Power, but they all had their tits out.

And the Riot Grrrls, though I loved them, were total potty mouths. Sure, I would prefer if it your young daughters were into Heart or Babes in Toyland or Patti Smith, but there's plenty of time for that later when these kids enter their black eyeliner years. So for now, give the li'l princesses what they want. It's totally okay this time.

Read about why Taylor Swift is destroying America here.