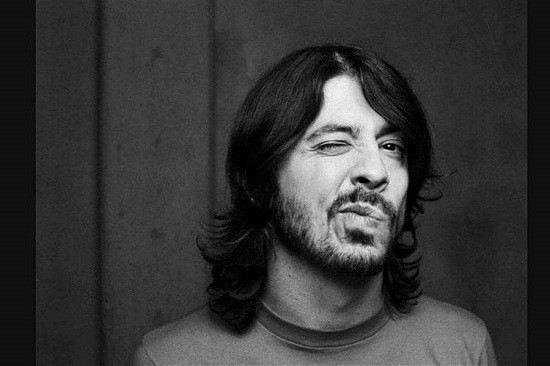 Dave Grohl is one of my favorite dudes in the world but he needs to hop off my radar for a minute. I'm a mega Nirvana fan and I've always admired Dave for his talent and humor, but lately I can't seem to get him out of my face. His mug is everywhere.

It all seemed to start almost a decade ago when Grohl became a talking head on VH1-type shows, providing expert commentary on some of his favorite bands. He was loose, informed, entertaining. Everybody loved him. Once his skills were exposed, he quickly became the go-to guy for a good sound bite as a talking head, a special guest or a drop-in drummer. He seems to be able to do everything (and do it well), so he's useful in many situations. Producers have decided that he's their No. 1 man — his presence is clearly seen as an improvement to any event. He slowly moved from his long-held role of rock & roll everyman into professional event attendee.

And now, oh now, the man is everywhere. I barely even watch television, and he still manages to make it on any screen near me with the frequency of the rising sun. Grohl is like a freakin' jack-in-the-box — you know he's going to pop up, you just don't know when. One of my favorite games is to try to spot him during major televised events. I don't know dick about football, so I spent the majority of the last Superbowl game scanning the crowd shots for his floppy hair — like a post-grunge version of Where's Waldo. I didn't see him during my Superbowl party, but I saw a photograph of him later after the game and felt validated. He was there. Of course he was there. I knew it.

Forget about Kurt Cobain: Grohl is clearly the voice of our generation — if only because he never lets anyone else speak.

There's a reason that his number is always called: He's smart, he's funny, he speaks well, he's good-looking and he always seems to be in on the joke. He's an affable dude, and his laid-back nature and casual cursing makes him seem like cool big brother. Grohl is nearly universally loved. He just gets it. And he seems to genuinely enjoy making fun, collaborative things happen during otherwise boring events. There are very few people who most of us would like to kick it with, and Grohl just seems like the kind of guy who would never have to buy his own shot in any bar on the planet.

Last year, Grohl released his Sound City documentary. It's pretty excellent, though it did sort of seem like 108 minutes of justifying Grohl's eventual purchase of the Sound City Neve board. (Apparently the most holy console since the Megasound 8000 in Josie and the Pussycats.) This documentary served as his official entrance into the film world, so expect him to expand his appearance résumé to include events that aren't musical at all. In this and other mediums, Grohl seems to be the opposite of everything that his generation is usually accused of (unambitious, lazy, directionless). Homeboy is going to get it all done, no matter what.