The 10 Best Concerts in St. Louis This Weekend: December 9 to 11 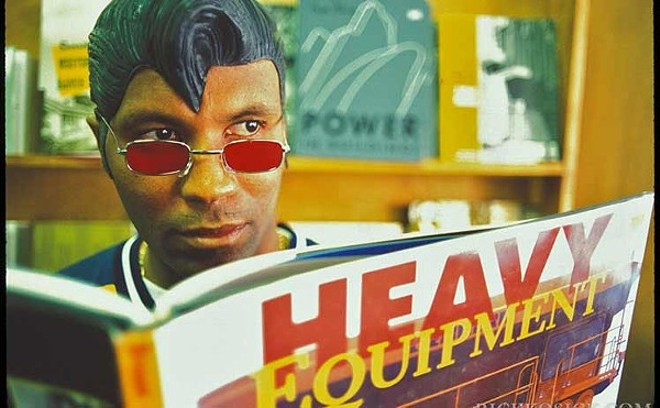 This weekend breaks up the usual winter lull in shows with a plethora of outstanding performers. Legendary rapper Kool Keith will perform at Blueberry Hill on Saturday — leave the kids at home for this one; Dr. Octagon has a notorious potty mouth. Steel Panther brings its over-the-top brand of comedic hair metal to the Pageant on Sunday — leave the kids at home for this one; the Panther boys have notorious potty mouths. Bassamp & Dano's Dan Kelley brings the eleventh installment of his Dan Kelley Christmas shows, and the Brothers Lazaroff will hold their sixth annual Hanukkah Hullabaloo — each show takes place on Saturday. Bring the kids!

Check out our full picks for the weekend below:

Al Holliday and the Eastside Rhythm Band
8 p.m., $10-$12. Off Broadway, 3509 Lemp Ave., St. Louis, 314-773-3363.
By Christian Schaeffer
You’ll find no shortage of local musicians who can tell you of St. Louis’ long musical tradition; hell, pick a bar in Soulard or on Broadway and you can hear them sing the city’s history right to you. But it’s rare that a talent as young as Al Holliday can encompass both tradition and invention. As the force behind Al Holliday and the East Side Rhythm Band, the pianist, guitarist and singer writes original soul-and-R&B inspired music, and orchestrates his vision with an eight-member band, all before his 30th birthday. On a track like “Oliver Sain’s 3 a.m. Soul Serenade,” Holliday pays tribute not only to the great St. Louis legend but to the very experience of living and playing in a vibrant musical city.

HeroInside II
8 p.m., $10. Pop's Nightclub, 401 Monsanto Ave., East St. Louis, 618-274-6720.
By Daniel Hill
Rapper Nick Menn first started the Hero Inside organization in 2012, after losing three friends to heroin-related deaths in the span of just eight months. Inspired by Menn's song of the same title, which resonated with addicts, former addicts and their families, the organization has worked to raise money and awareness to fight opiate addiction — Menn himself even has a standing appointment each Monday at his hometown Fairview Heights' City Hall, where family and friends of addicts are encouraged to come each week and talk about their struggles. For this show the group is raising money to help place addicts in rehab facilities, as well as accepting donations of canned food, coats and blankets to be given to local charities. Menn's connections to the local hip-hop community as a member of Doorway make for a stacked lineup sure to please rap fans. Doorway, Monhk, Colin Rich, Infamous Cartel, Chel, Bo Dean, Heir to the Throne and the Knuckles will all perform.

The Oh Hellos
8 p.m., $17-$20. Delmar Hall, 6133 Delmar Blvd., St. Louis, 314-726-6161.
By Johnny Fuggitt
From this 2015 review: Siblings Tyler and Maggie Heath form the core of the Oh Hellos, but an entourage of nine musicians came together for the Dear Wormwood Tour. With two sets of drums and seven stringed instruments, the Oh Hellos produce a robust sound, and never hold back when the songs call for it all. Just as many of the band's numbers build with rhythmic harmonies before dropping off to a faint, singular, still voice, the show repetitively built up to pulsating highs followed by reflective, timeless interludes. Tyler Heath appeared slightly uncomfortable most of the time as the center of attention, but this only added to the group's quirky charm. At one point between songs, when setup for the next number may have taken slightly longer than planned, he joked that "We're going to play some more music before I get weird."

Maness Brothers w/ Mark "Porkchop" Holder
9 p.m., $10. Off Broadway, 3509 Lemp Ave., St. Louis, 314-773-3363.
By Roy Kasten
"If I die on the side of the road, it's all right!" wail the Maness Brothers on the stand-out howling rocker "End of Me." The duo's frenzied, sludgy take on blues-rock sounds like it's headed full speed for the ditch — only to vault right over it. With just drums and guitar, brothers Jake and Dave Maness throw down a liver-wrecking, bone-shaking primordial groove that is wholly original and wholly thrilling, despite the debts to the many bass-less, Southern-fried rockers before them. The brothers Maness' serious chops always show through their gutter-digging, catfish-gutting blues. And when they hit the stage, the bodies always hit the floor.

Brothers Lazaroff Sixth Annual Hanukkah Hullabaloo
7:30 & 9:30 p.m., $10. Joe's Cafe, 6014 Kingsbury Ave, St. Louis.
By Daniel Hill
Brothers Lazaroff will be holding their sixth annual Hanukkah Hullabaloo this Saturday at Joe's Cafe, performing two sets — one at 7:30 p.m. and one at 9:30 p.m. Additional performers include DJ Boogieman and Rabbi James Stone Goodman and the Eight Nights Orchestra. Food and drink will be provided by Lu Lu Seafood, Dim Sum Food Truck and Urban Chestnut, as well as by the Brother Lazaroff themselves — as always with this affair, the group will be frying latkes on-stage.

11th Annual Dan Kelley Christmas Show
8 p.m., $10. The Heavy Anchor, 5226 Gravois Ave., St. Louis, 314-352-5226.
By Harry Hall
This year will be the eleventh installment of the Dan Kelley Christmas show, taking place at the Heavy Anchor on Saturday. Alongside the Dan Kelley Christmas Band, St. Louis groups the Holy Hand Grenades, Shark Dad and Heel Turn will perform. There’s a $10 charge to get into the bar, but all of the proceeds that would usually go to the bands will be donated to the Lutheran Outreach and Peace Park near the Fairgrounds neighborhood in north St. Louis, the center operated by civil rights activist, preacher, and advocate for the poor Otis Woodard, who recently died. The event usually raises up to $1,000 for the cause, Kelley says.

Whitey Morgan
8 p.m., $15-$75. The Ready Room, 4195 Manchester Ave, St. Louis, 314-833-3929.
By Roy Kasten
If Waylon Jennings didn't exist, then Whitey Morgan wouldn't either. The same could be said for Johnny Paycheck and Johnny Cash, not to mention Buicks, twin fiddles and class struggle. The mold should have been broken with the passing of honky-tonk's golden age, but somehow, against all the cornpone that still fuels much of the revivalist scene, Morgan is absolutely in that mold. With a rich baritone that stands up to Dale Watson and a hard-as-forged-steel band that stands up to pure shuffles and trucker stomps, Morgan is a heavyweight, hard-country hitter.

Kool Keith
8 p.m., $20-$25. Blueberry Hill - The Duck Room, 6504 Delmar Blvd., University City, 314-727-4444.
By Diana Benanti
Bronx-bred rapper Kool Keith has been delighting and terrorizing devout rap fans since helping found the Ultramagnetic MC's in the mid-'80s. He's sure about a couple of things: He hates every popular rapper ever; he's the sleazy godfather of abstract rap; and he's also the self-proclaimed inventor of "horrorcore" and "pornocore." We aren't aware of anyone else trying to claim those titles, but nevertheless, Keith's rhymes are marked by deranged, dissociative verses that start off normal and quickly digress into the land of the gross and strange. For instance: "MCs jump off, I stung your rectum like a stingray" and "Step in the club/I throw urine on your mind" — and those are the cleanest verses we could find without serious digging into his 26 solo releases, nine alter egos and personal myths so numerous they rival the number of times he mentions how good he is with his "thing."

Foxing w/ So Many Dynamos, Say Panther, Berlin Whale, Why Not
7 p.m., $15. Delmar Hall, 6133 Delmar Blvd., St. Louis, 314-726-6161.
By Christian Schaeffer
The holiday season is upon us, and along with all the stress and excess this time of year carries with it, reunions with long-lost friends and far-flung family are a happy byproduct. So it is with no small grace that locally based but nationally potent heavyweight Foxing is using its debut at Delmar Hall to bring together some old friends and even older bands. Both Say Panther and Berlin Whale were nervy, spastic pop bands that sprung from this town’s nascent MySpace-fueled underground — the same scene that several Foxing members were part of. Those two bands haven’t played a show in over seven years, so much like a visit from the ghost of Christmas past, this season's aging scenesters can relive their innocent youth for a few hours. Long-running electro-pop wranglers So Many Dynamos will also play the show along with up-and-comers Why Not.

Steel Panther
8 p.m., $25-$28. The Pageant, 6161 Delmar Blvd., St. Louis, 314-726-6161.
By Leah Greenbaum
It's almost too easy to dismiss Steel Panther as a one-joke band that never realized Spinal Tap had been there and done that. Except that this seasoned quartet is actually insanely talented and can rock a power ballad so hard, even the prudest skeptic will whip out her lighter. The jokes may not be subtle, but the whole affair is a well-produced tribute to the extravagance of the dirty '80s. Let this be a night for hairspray, black pleather, and boobs.