The 10 Best Concerts in St. Louis This Weekend: March 31 to April 2 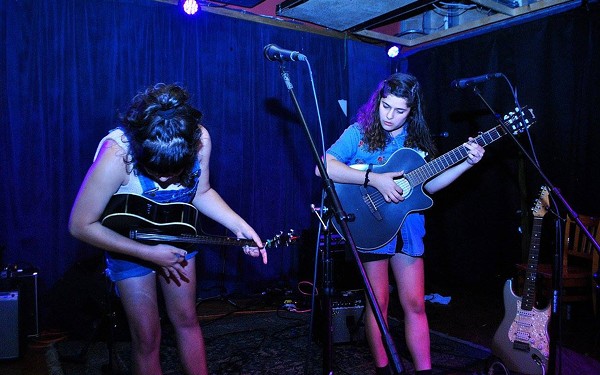 Photo by Briana Nicole Bedwell
Dubb Nubb joins more than fifteen acts in the pocket park next to Mangia Italiano for Femme Fest on Saturday night.
The weekend brings two homegrown festivals with Rude Fest and Femme Fest on opposite sides of the spectrum. In general the next few days skew to rock and roll so come prepared with some sort of flask or bottle (to stay hydrated with water of course) and ear plugs. Didn't your parents teach you to use protection?

Rude Fest
7 p.m. Friday, 2 p.m. Saturday and Sunday. Fubar, 3108 Locust Street. $25-$65. 314-289-9050.
By Daniel Hill
If ever there was an appropriate event for which to clad oneself in one's finest punk accessories, it is this weekend's Rude Fest. Featuring performances by more than 50 bands, including headlining sets by the likes of Slapshot, the Dickies and the UK Subs, the largely streetpunk-centric festival will once again take over both stages at Fubar for the entire weekend — and you better believe the punx will come dressed for the occasion. Pour glue in your hair! Pierce your face with knitting needles! Those jeans would look better covered in bleach and useless zippers! Adorn yourself in non-conforming clothing or risk not fitting in. You've been warned. Facetious fashion advice aside, we're serious when we say this festival is worth your time. Classic punk rock mingling alongside the newcomers, legendary out-of-towners mixed with locals, tunes ranging from the hardcore variety to oi to pop-punk. Something for everyone — regardless of attire.

Femme Fest w/ Dubb Nubb, Lé Ponds, Sister Wizzard, Willis, Shy Fire, Honeydew, Coby Sher, Mother Bear, Aiko Tsuchida, Berry Barbie, Midnight Giant, Hannah Buchanan, Dj Vinca Minor, nebulosa, the Sauce, Francis Maness
5 p.m. Ritz Park, 3145 South Grand Boulevard. Free.
Femme Fest could imply a "women only" kind of vibe, but the Facebook page states: "Celebrating femininity in all genders. Responding to the pressure felt to deny femininity in ourselves with the act of community and art." Curated by songwriter Francis Maness, the lineup above is no doubt led by women but clearly has a wide array of players throughout the day. The music on feature is reason enough to make this a must-attend event, but the booths and many tables filled with local art scattered throughout seal the deal.

Le Butcherettes
8 p.m. The Ready Room, 4195 Manchester Avenue. $12-$15. 314-833-3929.
One might assume a thing or two from the name Teri Gender Bender, yet the young bandleader of Le Butcherettes propels well beyond the rock norms presented at first glance. With singing that leaks between gritted teeth and riffing pulled from a damn-near clenched fist, the bloodstained songs here carry an air of ambition with subtle hints of showmanship. The band's rap sheet shows past tours with the likes of the Melvins, Mars Volta and the Flaming Lips among other post and prog rock regents. A shining seal of approval from Omar Rodriguez-Lopez — who has produced every full-length from Le Butcherettes to date — doesn't hurt either.

Les Gruff and the Billy Goat Album Release w/ The River Kittens, Old Soul Revival, Matthew McNeal
8 p.m. Off Broadway, 3509 Lemp Avenue. $10.
Initially Billy Croghan built Les Gruff and the Billy Goat off the back of his own personal woes, turning out songs throughout a sudden bout of unemployment. Through the release of 2014's A Cup of Coffee, an Apple, and a Suicide and a self-titled LP one year later, the band has sharpened its own brand of Americana that veers closer to folk than rock. The new album, The Last Night, refers to a now-defunct group whose members help make up Les Gruff. And while the band's name is a mouthful and has no hidden meaning for Croghan and company, this show will live up to its namesake with a petting zoo of real live goats.

Maximum Effort Album Release Show w/ Dracla, Mirror Mirror, The Stranger
9 p.m. The Sinkhole, 7423 South Broadway. $5.
No punk band worth its salt rolls without a solid theme or gimmick. Much like Alex Jones' time in Black Flag (this may or may not be an "alternative fact"), singer Nick Zengerling spits on conspiracy theories sourced from both pop-culture and his own twisted musings. The solid backing band ignites behind cries of illuminati and Area 51, making Maximum Effort feel more like a call to arms than a cry for help. Who knows what to believe anymore? Punk rock is the answer.

Squircle the Destroyer w/ The Pat Sajak Assassins, Bear Cub
9 p.m. Schlafly Tap Room, 2100 Locust Street. Free. 314-241-2337.
The "Post Rock Party" scrawled across this show's poster sums the night up well, yet it shortchanges the breadth of the bands involved. Squircle towers with an oppressive wall of melody, dividing its time between more somber moments and a distinct, triumphant build. The duo behind Bear Cub has honed its nuanced drum and bass (that's live drums and bass guitar) off and on for more than a decade. And The Pat Sajak Assassins bring the vibe of a video game pulled out of the TV by some black magic. One could just as well call it a "Prog Rock Party."

Sullen Reunion Show w/ The Humanoids, Swear Beam
8 p.m. Delmar Hall, 6133 Delmar Boulevard. $10-$12. 314-726-6161.
There are many bands called Sullen out in the wild, but only one lives in the heart of St. Louis. With '90s worship at an all-time high, the river city's own grunge gods of distant past have risen to reap what new trends have sown. The pair of local openers shows Sullen's legacy in plain sight with one band on the side of head-banging rock and the other basking in melodic noise.

Cherry Glazerr w/ Lala Lala, Ian Sweet
8 p.m. Off Broadway, 3509 Lemp Avenue. $12. 314-773-3363.
By Christian Schaeffer
The cover of Cherry Glazerr’s newest LP Apocalipstick does more than a fair job of telegraphing the sounds on the disc. The band’s name rings out in triumphant, comic-book-hero font while our heroine stands resplendent in combat boots and bellicose head-dress, a Rickenbacker guitar held at the ready. Clem Creevy leads this trio with a similar stance to the brightly colored album cover, not afraid to deploy sharp guitar work and a stout rhythmic backbone in the name of justice. It’s a belief that transcendence can be achieved through muscular, assured rock & roll — and one that’s hard to disagree with.

Chris Robinson Brotherhood
Delmar Hall, 6133 Delmar Boulevard. $20-$23. 314-726-6161.
Chris Robinson didn't start the Brotherhood as a side gig, but the band did come together during an extended hiatus from the more widely-known Black Crowes. While both projects were active for a short stint, the latter is now-defunct leaving the Brotherhood as Robinson's sole endeavor. With four full-lengths since 2011 and a busy tour schedule, the group is en route to reach the same heights as its predecessor.