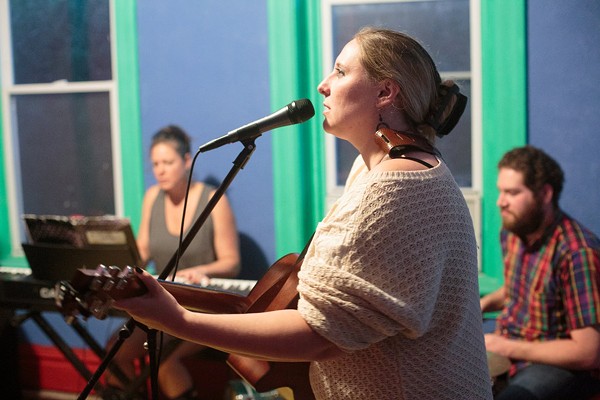 PHOTO VIA ARTIST BANDCAMP
The Defeated County leads a lineup of local acts for LollapaLoser at the Firebird on Sunday.
You could look at last weekend's LouFest one of two ways: The end to an overpacked summer of music that was a bit too busy for a city the size of St. Louis or a watershed moment that showed the rest of the world that, yes, this is undoubtedly a music town through and through. Let's bet on the latter and take the momentum from last week into the next three days, and furthermore, the season ahead.

We have singled out ten of the best concerts in town below, including a Hurricane Harvey relief show and Synth FeSTL II. We recommend checking with each venue to make sure the show is still going on in light of the protests in downtown St. Louis today. (We've rounded up some cancellations, but have likely missed others.)

Monophonics w/ the Right Now
9 p.m. The Old Rock House, 1200 South Seventh Street. $13-$15. 314-588-0505.
By Roy Kasten
With the emergence of blue-eyed-and-gruff singer and keyboardist Kelly Finnigan, the Monophonics has transformed itself from a soul-funk instrumental band searching for a Hollywood-noir film to soundtrack into a straightup pyschedelic-soul outfit, high on Undisputed Truth singles and echoplex, but still with groove (and flutes and horns and soul-sister backup vocals) to burn like a canyon fire. The San Francisco-based band’s latest album, Sound of Sinning, slinks and swaggers like Daptone favorites the Budos Band and yet tells its own story of decadence and delerium while throwing a dance party that’s as stoned as it is stone-cold funky.

Of Montreal w/ Showtime Goma and Nancy Feast
8 p.m. The Ready Room, 4195 Manchester Avenue. $20-$23. 314-833-3929.
With Kevin Barnes at the fore, Of Montreal has forcibly built an American institution of pop that attracts detritus of progressive rock and EDM. In a way, the songwriting supernova has dealt a kind of musical smoke and mirrors, edging experimental into the mainstream if even in small drops. And the band's play on gender roles and issues of identity offers yet another layer to unpeel from its dense core — 2016's Innocence Reaches does kick off with "How do you identify?"

Prairie Rehab w/ Andrew Ryan and the Travelers, Oh Caledonia
9 p.m. The Heavy Anchor, 5226 Gravois Avenue. $7. 314-352-5226.
By Roy Kasten
From Prairie Rehab Is One of This Year's STL 77:
You've seen the signs along the highway near the patchy grasses, weeds and wildflowers: "Prairie Rehab." It's oddly comforting to know the land still has a chance, regardless of MoDOT's protracted misadventures. The band Prairie Rehab, led by the husband and wife team of Lacie Williams and Scott Swartz, finds its own hopeful juxtaposition of the urbane and the earthy in a pop, folk and rock-tinged take on Americana. Revolving around Williams' impressionistic wordplay and literary nuances, the band has recently stretched out on a double-disc set called Conformateur/Idiomatic, exploring Latin and atmospheric sounds that somehow suit Williams’ delicately trilling voice as well as Swartz's classic pedal-steel licks.

Smile Empty Soul w/ Kaiju Killers, Skyline In Ruins, Cause Of Ruin, Audioburn
7 p.m. The Firebird, 2706 Olive Street. $12.50-$15. 314-535-0353.
The deftly titled Rarities, a compilation of unreleased cuts, dropped earlier this year as a kind of punctuation mark to Smile Empty Soul's career that has spanned from the tail end of the grunge movement to its recent revival steeped in nostalgia. With the recent departure of Ryan Martin and Jake Kilmer, songwriter Sean Danielsen is, for all intents and purposes, Smile Empty Soul. This tour features Danielsen backed up by Mark Young (Hed PE) on bass and Victor Ribas (Hurt) on drums.

A Benefit for Midwest Pages to Prisoners Project w/ Modern Gold, Carondelet Guy, Erin Jo
8 p.m. Foam Coffee & Beer, 3359 Jefferson Avenue. $7. 314-772-2100.
While the ticket price buys an acoustic take on Modern Gold's bluesy rock and the sweet, subtle songs of Erin Jo, the charitable cause here is reason enough to part ways with your hard-earned cash. The Midwest Pages to Prisoners Project aims to, in its own words, "alleviate a lot of the pain caused by the criminal justice system, and to provide a direct opportunity for self-education and collective struggle. Additionally, we exist because prison libraries sometimes fail in this respect: they are understocked or are only able to be patronized during specific and limited hours. We exist because prisoners are not strangers: they are brothers sisters, friends, cousins, mothers, and children." Read more at www.pagestoprisoners.com.

Hurricane Harvey Relief Benefit Show w/ You're Not Kablamo, We Should Leave This Tree, Biff Knarly & the Reptilians, Eternal Annihilation, Lowered A.D, Can We Win (reunion)
8 p.m. The Sinkhole, 7423 South Broadway. $7. 314-772-2100.
Even without the punk-leaning lineup, including a reunion of the now-defunct Can We Win, this show is a multi-layered raffle party with a wide array of prizes on hand. Permanent Vacation Tattoos, Chris Mollet, Alton Tattoo Company, Sarah Souders Photography, Clayton Peel and Jade Renee Photography offer both goods and services and, considering the max capacity of the Sinkhole, the odds to win at least one are pretty solid. This is the rare charity event where the attendees stand to benefit, solid concert notwithstanding. With the one year anniversary of the Sinkhole fast approaching, this is as good a reason as any to celebrate a month early and guilt-free.

Roky Erickson
8 p.m. Blueberry Hill's Duck Room, 6504 Delmar Boulevard. $25-$30. 314-727-4444.
By Daniel Hill
Austin, Texas' Roky Erickson has one of the most mind-blowing back-stories of any musician in modern history. At once a tragic tale and a story of success, his bio starts in the 1960s with his work as part of the pioneering psychedelic rock band the 13th Floor Elevators. The band strongly advocated the use of hallucinogenic drugs including LSD, mescaline and DMT — all known to warp a user's perception of reality — but when Erickson started speaking total gibberish during a 1968 performance, it turned out something more serious was at play. Erickson was soon diagnosed with schizophrenia and shipped to a hospital in Houston, where he was involuntarily subjected to electroshock therapy. An arrest a year later for the possession of a single joint of marijuana left him facing ten years in prison; Erickson avoided the sentence by pleading insanity — resulting in the rocker being pushed into another mental hospital, triggering more shock therapy and several escapes before he was finally released in 1972. Erickson spent the '70s and '80s convinced he was possessed by an alien and obsessed with the mail — the latter obsession resulted in charges of mail theft (Erickson was taking mail from neighbors who had moved and pinning it to his wall; the charges were dropped when it was proven he had never opened any of it). By the '90s he found a renewed interest in music, and in the early '00s his brother took custody of him, sorting out his legal affairs and getting him to take medication for his illness. Since then Erickson has re-emerged as a musical luminary, releasing True Love Cast Out All Evil in 2010 and touring steadily since.

LollapaLoser w/ Defeated County, Other People, the Vigilettes, Kenny Kinds, Tim Convy, Matt Basler
5 p.m. The Firebird, 2706 Olive Street. $10. 314-535-0353.
By Christian Schaeffer
Spend enough time around people in bands and you’ll learn that the best musicians often have wicked senses of humor as well. Superchunk’s Jon Wurster is as celebrated for his absurdist wit as he is for his drumming skills, and we recently mourned Walter Becker, who contributed guitar flourishes and dark sarcasm to Steely Dan in equal measure. So it’s not a shock that Loser, St. Louis’ long-running “live-action shame show” mixes this town’s music and comedy scenes liberally. For LollapaLoser, the show’s all-day music and comedy fest, those lines are rendered non-existent by co-hosts Chris Ward and Jeremy Essig as they corral a coterie of comedians and bands on the Firebird stage.

School of Rock 2017 Summer End of Season Concert
11:30 a.m. Atomic Cowboy Pavilion, 4140 Manchester Avenue. $8. 314-775-0775.
Students from both the Kirkwood and Ballwin chapters of School of Rock connect for a day-long concert of classic covers learned over the course of the summer. Expect a festival-like vibe custom fit to the confines of the Atomic Cowboy complex with music sourced from Bonnaroo as well as School of Rock favorites from the nineties and beyond. Count on hearing the future of the St. Louis music community give working cover bands a run for their money.