October is far and away the most comedy-heavy month we've had to date. Between open mics, local showcases, independent shows and Dave Chappelle, there's a show every night of the week. Fingers crossed it doesn't get baseball-ed too badly, because there may not be another month like this ever.

For those in search of laughter or curious about the goings-on of the comedy scene in St. Louis, we will be making monthly recommendations for shows in (and near) the city. From sure-thing hilarious to fingers-crossed, "Oh God! I hope this works" affairs, Funny Events is your connection to sketch, standup, improv and everything in between and out of the box.

Having been split in two, the Improv Shop's weekly Harold Night is now twice as fun. Whether you stop in for the early, late or both shows, you're in for a one-of-a-kind experience. Based entirely on audience suggestion, the manner in which Harold Night plays out is, in a way, up to you.

And following the theme of unpredictable, last month at the Shop Bobby Jaycox and Steve Raines produced a show that was two parts standup comedy, three parts improv and five parts hot sauce (314 Hot Sauce sponsored the show). Then they sprinkled it with $1 slaps and puppies. Yes, puppies. The Humane Society dropped in and at intermission brought out dogs up for adoption. And the $1 slaps? You could pay a single dollar to slap either Bobby or Steve. They called it "Stupid Brain" and they're doing it again, but definitely not the same, on October 29. And that's all we know. 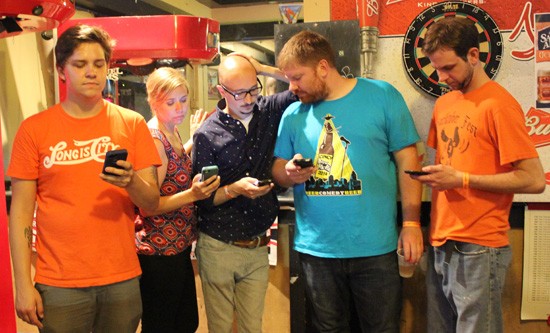 The Best Buds of Comedy is a collective of comics who in some way shape or form are a product or resident of the Cincinnati comedy scene. With their individual credits combined, they have a comedy trophy shelf worth admiring. Each has made their mark on Cincinnati, and as a group they will do nothing short of making each stop on their Midwest tour a memorable one.

With five comedians on the lineup, listing their accomplishments and street cred would quickly get long-winded. But a quick roundup will do: One of the Buds was named the Funniest Person in Cincinnati, another made his TV debut this Summer on NBC's Last Comic Standing and one even had a seat at the judges' table at this year's RFT Standup Throwdown. St. Louis is the first of eight stops along the tour, so the Best Buds will be full of energy and will without question deliver a rambunctious night of standup. And they fully intend on being your new BFFs by the end of the night.