The Best Concerts in St. Louis From December 22 to 28

Local music fans can now enjoy the happy side effects of St. Louis ex-pats coming home to visit family. That means reunion concerts aplenty with with occasional homecoming show for good measure (lookin' at you, Kristeen Young). So what if recent shopping has rendered your wallet into a thin, flimsy shadow of its former self? Most of the events on this list run from $5-$10. The holiday season is here to bring people together, you know. 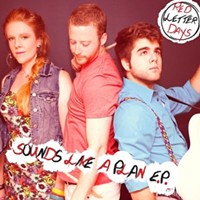 Red Letter Days w/ Tidal Volume, Static Life, Guava Monday, December 22 The Ready Room 7 p.m. | $10 By Christian Schaeffer From this 2013 Homespun review: Make no mistake about Red Letter Days' intentions: The young three-piece wants to be all over your radio. This five-song EP has the sheen and sparkle of modern radio rock so imprinted on its DNA that the band's stated influences (Paramore, All-American Rejects) appear as an inspiration and a target. According to its press materials, the band has a manager, a booking agent, and even decamped to California to record Sounds Like a Plan. So just know up-front that this isn't a band content to simply dip its toe in the mainstream - this is a plunge. The trio is centered around Katie McKenna's vocals, which can dip down low enough to grab some Pat Benatar-esque huskiness. Katie's brother Willie McKenna helms the drum kit and Alex Bolano plays guitar with enough bravado to pull off a passable finger-tapped solo on opening cut "Beautiful Eyes." But brief discursions aside, these songs are built around hooks and big, bouncy choruses.

Bhob Rainey Tuesday, December 23 Lemp Neighborhood Arts Center 8 p.m. | $5 Joseph Hess Holiday traditions die hard, and this one won't go until the Lemp Neighborhood Arts Center does. Bhob Rainey digs at the secret corners of your brain, wielding a soprano saxophone to invoke aural anomalies. Rainey is sure to peel the paint off the walls with the unconventional means he uses to create otherworldly sound. For fans of experimental composition, his name recalls short days and cold weather, as Rainey usually descends upon the Lemp Arts Center during the brisk days leading up to Christmas. His honest style of free playing provides a unique performance, making every concert a once-in-a-lifetime experience.

Mark Dew Wednesday, December 24 Hideaway Restaurant & Lounge 8 p.m. | free To walk into the Hideaway is to enter a place that seems frozen in time, where the dozen or so seats around the piano are packed with your grandparents' friends, decked out in chunky jewelry and tilted fedora hats. Ostensibly, they're here to listen to Mark Dew play -- he's here Wednesday, Friday, Saturday and Sunday nights -- but you're just as likely to hear one of those old-timers sitting around the piano trill Charlie Rich's "The Most Beautiful Girl." And when Dew finally has his turn at the mic, he'll say something humble, like, "I apologize; it should have been in the key of F." No matter. Dew is the conductor of this time-traveling train, and everyone's on board. Dew, who is blind, has been the piano man here for nearly a quarter-century and jokes that the best part about working here is, well, getting paid. He marvels at the younger set trickling in and its knowledge of the Cash and Sinatra songbooks: "The more the crowd gets into it, the more I play," Dew says. And that's enough to keep him around. "I'm not quite ready to be out to pasture," he says. "Yet."

Jake's Leg Chrstmas Thursday, December 25 BB's Jazz, Blues & Soups 9 p.m. | $10 From the RFT Music archives: For more than 30 years, Jake's Leg has performed the music of the Grateful Dead across St. Louis. That's longer than the Dead themselves were together, which says something about the longevity of their music and the dedication of the fellows in Jake's Leg. The five-piece purposefully avoids being a straight tribute act -- there are no Jerry Garcia stick-on beards here (though give keyboardist Bill Noltkamper a leather vest and he could make a passable Pigpen). Instead, the band reconfigures the Dead's songbook through its own lens, continually reshaping the well-known jams and deep album cuts. Jake's Leg plays out at least three times a week, performing both electric and acoustic sets wherever young and old Deadheads gather to bask in the warm rays of improvisational rock & roll.

Follow through for more shows happening Friday through Sunday.