The Best Concerts in St. Louis From November 10 to 16

Ten days into November, and I haven't seen a single mention (or picture) of "No Shave November." Wonderful -- I'm really glad we, as a culture, were able to resist ingesting the same meme year after year. Really, you could sub the word "shave" for anything else. Let's see you try "No Pants November" in this cold. I have a better idea: Let's go out, every night. Like the cheesy name of this column, I challenge you to not miss a single show on this list. You'll have to show hop on Friday and Saturday, but you'll be able to brag about your worldly, diverse tastes.

New Pornographers w/ The Pains of Being Pure At Heart Monday, November 10 The Pageant 8 p.m. | $25 By Christian Schaeffer Bandleader A.C. Newman has said that the New Pornographers' latest album Brill Bruisers was his group's attempt at a thoroughly upbeat record -- a seemingly odd claim for one of the modern era's more celebrated power-pop acts. But coming after two mature but occasionally ruminative LPs, the new songs bristle with life. The title track is as relentlessly melodic as any song since "Sing Me Spanish Techno," and the band's reliance on the twin engines of acoustic guitar underpinnings and analog synth set dressing give weight to the usual hooks and pitch-perfect harmonies.

Natural Child w/ The Maness Brothers, Shitstorm Tuesday, November 11 Off Broadway 9 p.m. | $8-$11 By Joseph Hess This Nashville power trio plays straight-up rock & roll, frills be damned. The band's hometown plays a big part in its sound, which incorporates solid blues with chopped bits of country. But Natural Child rips through with red-hot guitars and a sharp rhythm section, and it doesn't drag on like many of its contemporaries. That brevity sets the band apart and will keep yours ears lusting for more.

Peelander-Z w/ Scene of Irony Wednesday, November 12 The Firebird 8 p.m. | $12-$14 By Jaime Lees Peelander-Z is like Gwar on ecstasy. From Japan (via New York City), the members' bright color-block costumes make them look like after-hours Power Rangers. Described as "Japan action comic punk," the band is loved almost exclusively by those intrigued by novelty: comic-book addicts, professional wresting devotees, anime enthusiasts and Juggalos alike. Peelander-Z is a good time wrapped up in a j-punk box. With songs such as "Ninja-High Schooool," "Ice Cream!" and "Pun! Pun! Punkrock!," the band gets audiences bouncing like little kids on a sugar high. Come for the spectacle, stay for the smiles. Check out our four-panel comic about the band. 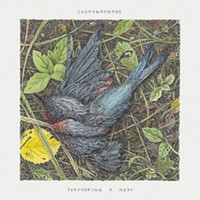 Caddywhompus w/ Cold Rooms, Early Worm, Travel Guide Thursday, November 13 Foam 8 p.m. | $5 By Joseph Hess New Orleans duo Caddywhompus breaks through the sheen of modern indie rock by deconstructing what would otherwise be perfectly fine pop songs. Vocalist Chris Rehm knows how to command a chorus, belting his voice over busy fret-tapping and triumphant builds. But the band isn't all moonlight and roses -- passages range from sappy to stoner-rock, with drummer Sean Hart providing the pulse. To his credit, he lends a rough edge that would feel right at home in a hardcore band, but here he punctuates pretty riffs with class and darker parts with thrash. Expect shades of '90s emo (the kind we're not embarrassed to say we like) without the drawbacks of, well, whiny white guys.

Follow through for the rest of this week's picks.