The Best Concerts in St. Louis This Week, April 27 to May 3 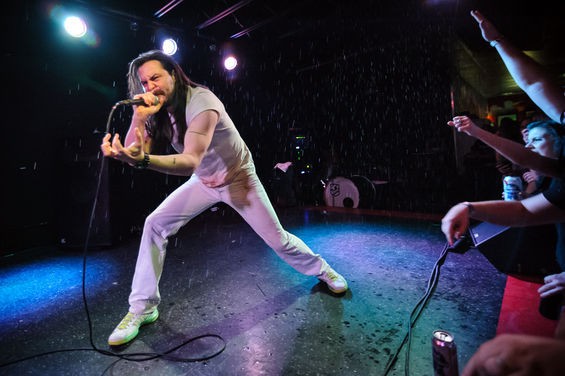 Photo by Jason Stoff
Andrew W.K. returns to St. Louis on May 1 as a one-man band. Check out photos from his 2013 performance in RFT Slideshows.

Although Andrew W.K. might never return with a full band as he did during his MTV glory days in the early aughts, he has since become something of a self-help guru. Remember his column "Ask Andrew W.K.?" If not, just know that his live show this week at teh Firebird should be relentlessly positive, barring any surprise mental breakdowns (which could make for an even more entertaining night).

Any reader with a keen eye will notice that most of our top gigs this week take place at one of two venues. We're not playing favorites; both the Firebird and Off Broadway are killing it lately, and the staff at both spots deserve props. Tip your bartender, alright?

Soulard Blues Band Every Monday Broadway Oyster Bar 9 p.m. | $5 From the 2014 RFT Music Awards: One day, dear reader, the Soulard Blues Band will be no more. It's just a fact. And one day you'll wonder why, despite all the opportunities just about every day of the week, you never saw this St. Louis institution in its prime -- and no, the band's prime ain't over. If somehow you've never danced your ass off while Art Dwyer lays down a bass line as smooth as crushed velvet, or while Marty Abdullah swings his phrasing on "Kansas City Blues" or "Dust My Broom," or while Tom Maloney plays a solo that would make his mentor (the late, great Benny Smith) smile, well, you really should. Don't take this band for granted. Pay your respects soon; they've been earned.

Amy LaVere w/ Yankee Racers, Miss Jubilee and the Humdingers Tuesday, April 28 Off Broadway 8 p.m. | $10-$12 By Roy Kasten From the RFT Music archives: Amy LaVere could have been the honky-tonk angel to end all honky-tonk angels, but the pull of the blues, soul and rock & roll was too strong. There's still plenty of country in her wickedly raspy voice and pumping bass, only she never plays the twang straight; she always bends it toward the jukes and the swamps. A student of the late Jim Dickinson and collaborator with his son Luther, LaVere isn't just a pretty face with a pretty voice. She's guided by the spirits of her native Memphis, and she'll take you all the way there.

Von Strantz w/ Town Cars, Cassie Morgan and the Lonely Pine, Ryan M Brewer Wednesday, April 29 The Firebird 8 p.m. | $8 By Joseph Hess Soul isn't exclusive to big bands and singers playing backup -- no, Indiana natives Jess Strantz and Kelsey Horton manage to pile harmonies atop strong organ as a duo stripped down to the barest essentials. Despite its humble trappings, Von Strantz comes across more succinct and complete than groups five times its size, never mind the constant nods to both dark synth-pop and classic hymns. The list of locals on this show reads like a primer on St. Louis indie-pop, so showing up late won't be too fashionable.

Local H w/ Battleme Thursday, April 30 The Firebird 8 p.m. | $12-$14 By Bob McMahon From the RFT Music archives: It's easy to take Local H for granted. After decades of pumping out consistently entertaining hard rock and maintaining a hard-work touring ethic, the Chicago duo often gets overlooked by critics more interested in covering the latest sound than promoting no-bullshit rock. This is a shame, but it's not like the band or its army of devoted fans needs them.

Follow through to page two for the best shows in and around St. Louis this weekend.