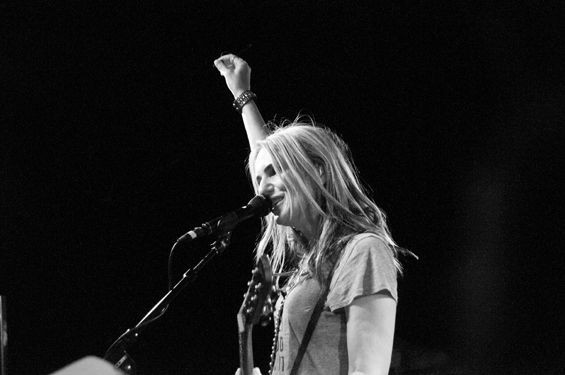 St. Louis stopped being "fly-over country" years ago. In addition to whatever big arena rock tour comes stomping through, take a look at what this city has to offer each and every week. Young jazz crews like Animal Children host free, open jams at Foam on Mondays while Mark Dew holds it down at the Hideaway every Sunday.

This week also brings back Veruca Salt, the '90s band that bridged the gap between riot grrrl and grunge, performing for the first time since its fifteen year reunion tour last summer. For a change of pace, we recommend the public viewing of "Shakedown," a documentary about local Grateful Dead tribute group the Schwag. Browse the list and you'll see how biased we are toward a certain coffee house on Cherokee Street; Foam might be the best small venue St. Louis has had in decades, so go investigate and find out for yourself.

Animal Children Open Jazz Jam Monday, July 20 Foam Coffee & Beer 8 p.m. | free By Christian Schaeffer From the RFT Music archives: It's not impossible to lead a jazz band from behind a drum kit -- just ask Ark Blakey -- but it does take a certain kind of selflessness to drive the beat while giving a platform to your instrumentalists. Drummer Kaleb Kirby is the leader and chief composer for the new jazz sextet Animal Children, and while he's done time with swing-oriented jazz as part of Tommy Halloran's Guerrilla Swing, he brings a certain expansiveness to his own compositions. Kirby keeps a firm grip on the sway of these songs, but local jazz-scene veteran Adam Maness is a key architect here -- not just as an elder statesman in a troupe of relatively young guns, but as the hands behind the Fender Rhodes electric piano. That instrument's plinky tone and muddy depths immediately call to mind everything from the proto-smooth-jazz of Bob James to the fusion experiments of Return to Forever to the barbed mellow of Steely Dan. And Maness references those traditions while helping establish the band's place in the modern jazz tradition -- albeit with a few detours.

"Shakedown" - The Schwag Film Documentary w/ Five other short films Tuesday, July 21 Tivoli Theatre 5 p.m. | $12 By Joseph Hess While this event doesn't technically qualify as a "concert," the featured film is no less important to the history of St. Louis music. Jerod Welker's short "Shakedown" zeroes in on Jimmy Tebeau, Camp Zoe and the Schwagstock festival -- all major parts of the Grateful Dead canon. For a tribute band, the Schwag takes on a distinct identity -- one this film aims to explore within the bridge between audience and performer.

During their fifteen-year musical estrangement, Nina Gordon and Louise Post frequently shared the same dream: They'd perform onstage together just like in the mid-'90s, when Veruca Salt became alternative-nation nobility with hit single "Seether." Except in these REM reveries, the Beatles replaced their other bandmates.

"It'd be, like, "Holy shit, I'm onstage. Wait, there's Louise to the left of me. And there's John Lennon," Gordon says, laughing. She's in North Hollywood, where the grunge rockers' original members are rehearsing for their first shows since 1997.

The Deadly Vipers w/ Big Blonde, The Crisis Thursday, July 23 Foam Coffee & Beer 9 p.m. | $5 By Daniel Hill The Deadly Vipers seriously kick ass. Blending psych-rock grooves with punk songwriting sensibilities, the all-X-chromosome quartet keeps it simple but impossibly catchy on February's Ouroboros. With vocals ranging from from poppy and clean to snarling and hissed, the album keeps listeners on their toes. Black Sabbath is probably the most readily apparent influence (with a healthy dose of punk thrown in for good measure), and the lyrics bear that out: "Keep the sun behind the moon/shaman knows what to do/take my hand for countless days/bring me to that sacred place." Tony Iommi would be proud.

Follow through for the best concerts in town this weekend.