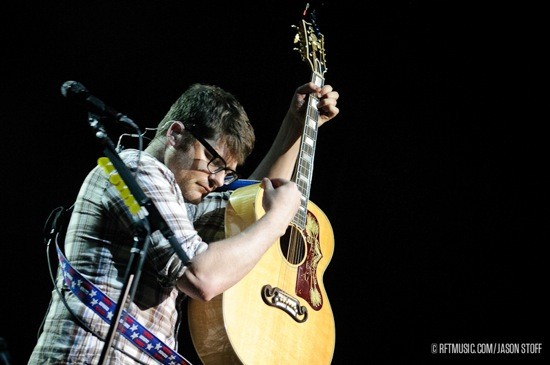 The Decemberists return to St. Louis this Saturday at the Peabody Opera House. View more photos from its 2011 show at the Pageant in RFT Slideshows.

Read on and let us know what you're looking forward to in the comments below.

Ex-Cult w/ Beth Israel, Black Panties Tuesday, May 26 Foam Coffee & Beer 10:30 p.m. | $8 By Joseph Hess This show is on "punk time." That means don't arrive before 10 p.m., unless you plan on pre-gaming with a jazz band. On second thought, that might be the perfect precursor to Memphis' Ex-Cult, who hides a soft psych-rock center inside its gruff punk exterior. Howling riffs race over a grimy bass tone, rife with enough crunch to fill out the sound. While this is most definitely rock, there's a dark aesthetic here that lends a distinct rip to the whole affair. Heavy but not too heady, the songs tear through at top speed, leaving before they wear out any kind of welcome.

St. Vincent w/ Sarah Neufeld Wednesday, May 27 The Pageant 8 p.m. | $25-$30 By Christian Schaeffer Say what you will about the Black Keys -- or, better yet, don't -- but St. Vincent fans were more than a little miffed that the duo chose Annie Clark's peerless outfit to open the band's winter show in St. Louis. A sold-out arena is hardly the ideal setting for Clark's nervy, avant-pop compositions. So it's a relief that St. Vincent returns to town in the friendly confines of the Pageant to perform tracks from last year's self-titled LP, which continued to push Clark's guitar prowess into more adventurous (and occasionally soul-baring) directions.

Alarm Will Sound w/ Syna So Pro Thursday, May 28 The Sheldon 8 p.m. | $15-$20 By Christian Schaeffer For well over a decade, the New York collective Alarm Will Sound has sought to invigorate the world of classical music by giving space for new composers to air their work with the weight of a twenty-odd person orchestra behind them. For this week's show, AWS delves into works by composers best known for jazz and electronic work: Aphex Twin's recent "Minipops 67" will be retooled, as will pianist/organist John Medeski's "The Eye of Ra." Most exciting, though, is the performance of a new work by local musician Ryan McNeely, who records as Adult Fur and who recently collaborated with Alarm Will Sound members at a March show in St. Louis.