The Best Super Bowl Commercials by the Music 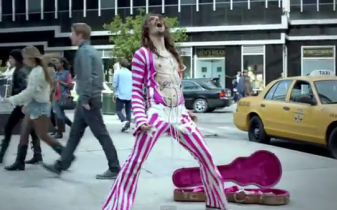 The Darkness saved Samsung's ad from spiraling down into forgettable territory.

Let's be blunt. This year's Super Bowl was dismal for Midwesterners.

Sure, there were exceptions. Transplants from Boston, New York City or New Jersey may have enjoyed the game. Some may have had a rooting interest in David Carr's quest for a pity Super Bowl ring. And who knows? Maybe some people just watched to see the artist who made this video dress up in a cheerleader uniform and flick off America.

In any case, this year's slate of commercials attempted to fill a void. And like every year, many of the ads incorporated popular music to snag the attention of the masses.

Which spots succeeded? And which fell flatter than Rex Grossman's performance in Super Bowl XLI? Here's an unscientific take on some of Sunday's most memorable advertisements:

BEST AD TOUGHENING UP A MID-SIZE CAR: Kia's "A Dream Car. For Life." Kia Optimas don't exactly conger up a particularly tough image -- it's basically in the same realm as a Honda Accord or a Toyota Camry. But what happens when the car is paired up with Motley Crue's "Kickstart My Heart" and UFC legend Chuck Liddell? Well, it makes the car seem a lot more intimidating!

Motley Crue is one of the more popular touring bands around these days, so it was probably a smart move to get them involved. Interestingly, "Kickstart My Heart" is mainly about how somebody stabbed Nikki Sixx in the chest with adrenaline needles after a nasty heroin overdose.

BEST USE OF NELLY: Pepsi's "King's Court" St. Louis residents, take heart: The University City rapper's "Hot in Herre" was sung for just a few seconds by a tone deaf jester before Sir Elton John sent him into a dungeon with Flava Flav.

There were no other uses of Nelly in Super Bowl commercials, so this ad achieved this designation by default. As former state Rep. Don Calloway -- who now works for Anheuser Busch -- pointed out, the ad looks eerily similar to the video for Michael Jackson's "Remember the Time." Also, who would actually be imprisoned to drink regular Pepsi? That stuff is gross.

BEST USE OF KANYE: Bud Light Platinum's "Factory" While Bud Light utilized comedy to attract attention and Budweiser tapped into Prohibition-era nostalgia, A-B's newest product - Bud Light Platinum - used one of the better songs from Kanye West's My Beautiful Dark Twisted Fantasy as background music. The sparse piano from "Runaway" seemed to be a particularly poignant choice to go along with this no-frills, all-business spot.

There was actual competition for this ad, as The Throne's "No Church in the Wild" played during a trailer for the film Safe House.

BEST USE OF NUDITY: M&M's "Just My Shell" Those rascally anamorphic candies kind of took things to another level Sunday. While other companies used nudity to [unsuccessfully] grab attention, this spot played around with the concept to some degrees of success. It certainly got more plaudits than the billionth GoDaddy commercial or H&M's ad starring a nearly-nude David Beckham.

Also it's a safe bet that LMFAO -- a group that was featured in a Bud Light commercial and the halftime show -- will be utilized in Super Bowl commercials until the end of time. Those bros are commercial masterminds.