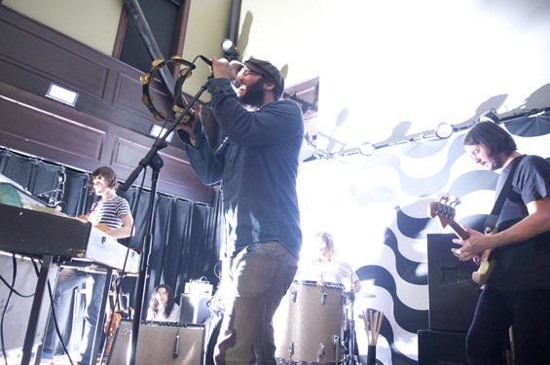 Pity the folks turned away at the door of the Old Rock House last night. It's been four long years since the Black Angels played here, and the band sold the shit out of that place last night and left in a storm of cheers.

The triple bill of local shitkickers Tone Rodent, Canadian newbies Suuns and the mighty, terrifyingly awesome Angels was perfect; the rock got started first, the weird came next, and the bliss was saved for last. Each set was mesmeric in it's own way: Tone Rodent for its noisy shoegaze blitz, Suuns for its nebulous, assbackwards cadence and Black Angels, psych saviors, for the masterful Velvet Underground reverence.

Had anyone less challenging played right before the Angels, the crowd might have mutinied in anticipation. But Suuns meticulously layered sound is a bit of a headfuck, and its kraut riddims intertwined with minimalist beats won over the already hyped room. The band opened with the outstanding "Arena," sound barrier shattering electronics punched up to somersaulting prog with jazzy bass and spare, roiling drums. It immediately struck the right chord with the audience. Though at times superfluous amidst the forceful sweep of noise, Ben Shemie's demented sing-speak had a subdural effect, as if he were neurosis in human form, implanting paranoiac messages inside yr skull.

Employing Suicide's flagrant/amazing disregard for melody, Suuns were all Can-rhythm and Battles-cribbed precociousness. Juicy riffs blushed with drum machine kisses and fluttering synth for "Up Past the Nursery." By turns hypnotic and clobbering, the most impressive thing about Suuns is their restraint. Each cut was so complex and manicured, it's hard to believe these guys haven't been evolving their style for a decade.

The crowd was beyond ready to marinate in the Black Angels' psychotropic atmospherics, and marinate they did, for 70+ spectacular minutes. The band walked out to a sound bite of John F. Kennedy's Congressional address on the Apollo mission in 1961: "I believe this nation should commit itself to achieving the goal, before this decade is out, of landing a man on the Moon and returning him safely to Earth..." The dynamic ballast of "Bloodhounds on My Trail" from dank debut Passover was Led Zeppelin worthy, and was unfortunately one of only a few older songs. The set was heavy on Phosphene Dream and too light on Directions to See a Ghost, but the concentrated energy of the new material kept the crowd locked into a groove.

The Black Angels' politically charged neopsychedelia has repeating themes: hauntings, Vietnam, two songs with "sniper" in the title, two mentions of June, liberal use of "kill" in all its variations. These songs are calls to arms (also a song title), yet they are also calls to enlightenment. The Vietnam parallel to Iraq is overt. They're not nudging you to wake up and relearn the lesson of that nineteen-year-conflict, they're poking you in both eyes and smacking you around the head for good measure. The lyrics plead for an evolution of social consciousness, but the music just fucking rocks.

"Haunting at 1300 McKinley" thrummed infectious with blues feeling and raw garage bombast. "Black Grease" burned with chemical intensity. Narcotized guitar fumed as Stephanie Bailey mutilated her drumheads.The scorching slowcore of "The Sniper" entranced from the first mellow bars to the delirious "We decide what goes inside your head." The funhouse organ glittered like diamond chips in seltzer on "Yellow Elevator #2" and distortion coated guitar sprinkled spectral delusions as Maas throatsang his bearded heart out. The behatted frontman was at his best, his androgynous voice perfectly on point. Maas and the band thanked the crowd again and again, sounding genuinely appreciative and maybe a little surprised by the response.

Maas exited the stage beaming as the crowd dissolved into screeches and hollers. Someone started the encore chant, and the audience kept yelling for three solid minutes before the band returned with incredulous smiles (and a half-smoked cigarette for guitarist Nate Ryan), imparting a wholehearted "You guys are crazy, thank y'all so much," before erupting into "The Prodigal Son." The guitars started grinding like coke teeth before the spark of "You on the Run." Maas emitted a bloodcurdling howl as if channeling one of Colonel Kurtz's savages pre-beheading and all hell broke loose. Drugs are well and good, but this, this was a high to die for.

*Blame it on the Al-al-al-cohol: This setlist is not correct. Help?

Critic's Notebook: Missed most of Tone Rodent. That will not happen again.

Yes, I am holding a notebook and no, I will not take your fucking drink order.

Overheard in the Crowd: "Who rocks harder than The Black Angels?" "The Doors. Maybe The Stones."--This bold claim made me laugh at first. I stand corrected.

Notebook Dump: Meaning to write "So Velvet Underground" at one point in the Angel's set, I wrote "So Black Angels."

If you haven't already, check out our interview with Alex Maas, who may or may not be the coolest person in the world.