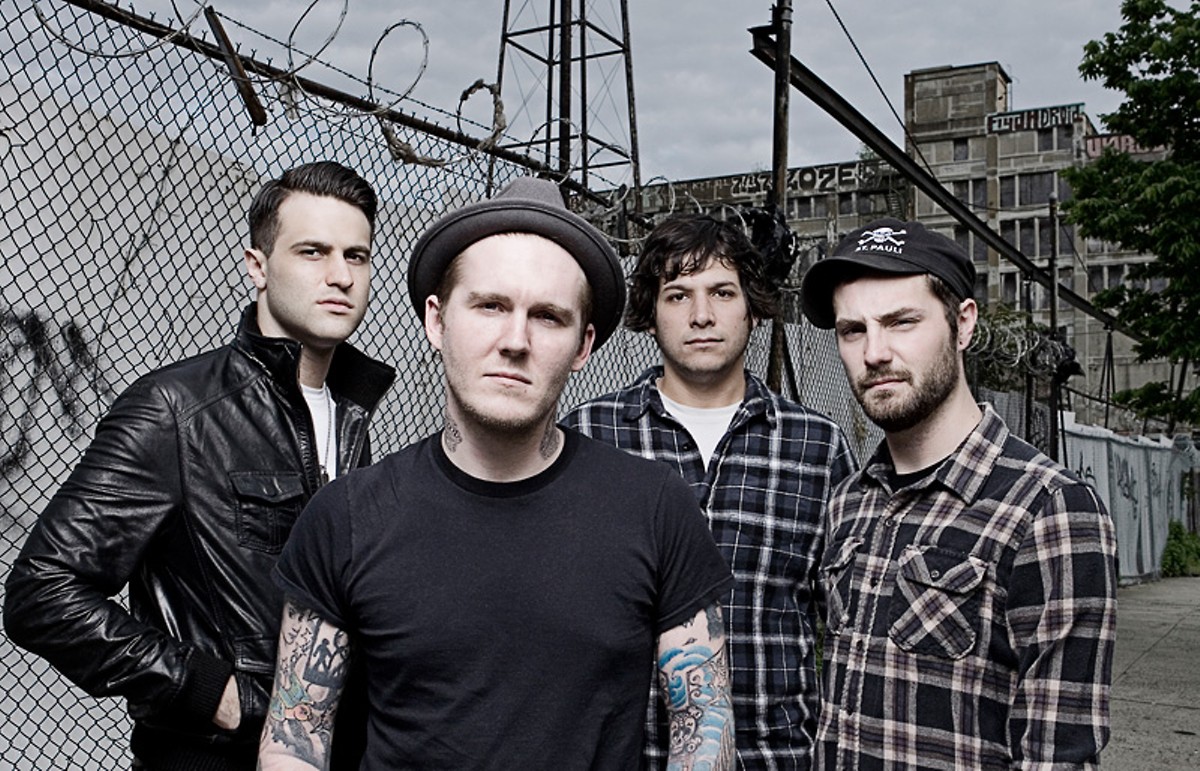 Everyone from the mainstream press down to the power brokers in D.C. has a convoluted idea of what constitutes "America" these days. However, it's certainly clear how New Jersey's Gaslight Anthem defines its America. Bruce Springsteen is president; Tina Turner's the First Lady; Social Distortion's Mike Ness is the Secretary of Defense, and the White House is actually Hitsville, U.S.A., in Detroit, home of Motown Records.

With the spirit of '70s soul, the swagger of punk rock and an E Street drive, the Gaslight Anthem has catapulted from basement buzz-band to the brink of bona fide rock stardom. And the quartet's blood, sweat and tears are finally reaping dividends: Aside from selling out theaters across the globe, the band just recently broke into the Billboard Top 20 with its critically acclaimed album, American Slang. Apparently hard work really does pay off; maybe its concept of America isn't too far off after all.

While in between gigs in Oxford, England, bassist/vocalist Alex Levine spoke to B-Sides about Slang and its recent success.

B-Sides: How are the shows going over in the UK?

Alex Levine: Unbelievable. Some of the best shows we've ever played in our life. We sold out Brixton Academy, which has been a dream for Brian [Fallon, vocalist] and I. But just to play there — let alone sell it out. It was an unbelievable show.

It seems like there's a rabid fan base over there for bands with that "New York/New Jersey sound." There's been a warm reception to bands like you guys, the Hold Steady – and even the same thing happened when Bruce Springsteen first crossed the pond. How do you explain their infatuation with that sound?

It's funny, because most people say that the hardest place to break is in the UK. And for us it was the exact opposite. We were on the cover of a magazine [Kerrang!] in the UK before we even played a show there. And we were playing basements in the U.S. at the time. To be honest, I don't know what it is in the UK that might be different all across the world. But the thing with the UK is that they have a great sense of integrity in what they listen to and support. And, from what I'm told, if they like a band, they like a band.

You guys just hit No. 16 on the Billboard charts. What went through your head when you first heard the news?

We were in Germany for the Southside Festival, and I woke up in my bunk and looked at my phone and was like, "Whoa! Number sixteen, huh?" It was an amazing feeling, because it seems like nobody even buys records anymore. And to see these huge artists like Tom Petty and Christina Aguilera up there. It's like, "Really? I'm just thrown right into that mix, huh?"

You guys recorded American Slang at the legendary Magic Shop studios in New York. How do you think recording close to home in New York influenced this album compared to recording your previous album, The '59 Sound, out in California? I'd imagine the last one seemed more like a vacation.

Yeah, there was definitely a conscious effort to record at home this time. Mostly because we hadn't really been home in a while, let alone have a "home." So we wanted to go back to where we're from and set up apartments for us, which we didn't have in the past. We were on the road for four years straight. And it definitely shaped this record differently compared to recording in California. I was traveling by train an hour-and-a-half every day just to get into New York City. And it was in the middle of the winter, so there is a bit of darkness there because it always seemed to be dark and cold.

I would imagine you almost felt like you were working a regular nine-to-five job again.

That's exactly what it was. Right after Thanksgiving we started practicing and writing songs. I woke up at nine o'clock, and I got home around six o'clock. My fiancée kept saying, "It's weird to see you like this. You're a working man again instead of jumping around onstage!"

This album seems more distinct from your two previous. There's more instrumentation, and the songs seem to breathe more. As a result, I'd imagine it gave you more of an opportunity for the bass to stick out within the songs.

Actually, that was a big deal for the songwriting structure on this one. From the beginning, Brian wanted to create more space and not rely so much on the hard, four-chord, punk-rock riffs that we played in the past. And that made it fun. I got to really expand on things I hadn't in the past. But I'm pretty much a punk-rock bass player. I really don't like it when bass players just start riffing all over the place. It doesn't make sense. That's why we have a lead guitar player.

And Alex [Rosamilia, guitarist] seems to do plenty of riffing on his own.

[Laughs] Yeah, that's all he does! I think he's doing it outside of the room I'm in right now.

It's pretty interesting, to me at least, that you guys have always remained true to staying within the parameters of your four-piece band. Many bands in a similar situation as yours tend to branch out and add keyboards or horns. Is this something you've stayed away from on purpose?

Yes, 100 percent. If you can't pull it off live, why bother doing it? We get a little bit of slack from our producer [Ted Hutt]. He'll sometimes suggest we try something, and we always come back to, "Well, we can't do that live." But we tend to find different ways to pull off that bigger sound while still being able to do it live. Alex [Rosamilia] is great at creating a wonderful ambiance around the music. For now, I'm not into the idea of hiring new people just to fill out the sound. I feel like it may take away from the band dynamic. Maybe fifteen years from now, we'll add a couple background singers or something. But I think bands sometimes add those players a little prematurely.