The Hibernauts CD release show for Periodic Fable: Outtakes from the Feature 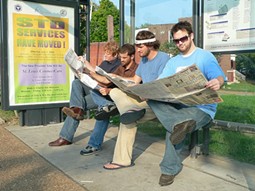 In this week's paper, I broke bread (well, ate Blueberry Hill food) with the Hibernauts, an up-and-coming indie-rock quartet in town. To say the four are hilarious is an understatement; if laughter is the best medicine, then I'll be immune from disease for months to come. (My God, that's cheesy. Sorry, I'm tired.)

Either way, many of the band's funniest quotes didn't make the paper. So without further ado, here are some more quotable quotes from the band. While you're reading, take a listen to two of the best tracks from the band's Periodic Fable, "Scissors" and "Into the Storm/Out to the Sea." The band's CD release show is at Off Broadway this Saturday night at 9 p.m. with Gentleman Auction House and Foundry Field Recordings.

"Into the Storm/Out to the Sea":

Bassist Bill Vehige, on the band's inventive songwriting: “I know if I bring the simplest thing to practice -- or if Jack and Tom bring a two- or three-chord idea -- no matter what happens, if it’s going to be a song, I trust all of us to make it a good song. “We’re always trying to throw in little ‘Gotcha!’ parts. Like, ‘You didn’t see that coming, did you, audience?’”

Drummer Brett Ramsey, on his enthusiasm for local music: "One time [Gentleman Auction House's Mike] Tomko and I met, we were just going over some things, really pre-production. We’re talking all this, we’re getting all revved up. we’re talking about our bands and the whole St. Louis local music scene. To the point where some gal was eating behind us…”

Vehige interjects: “[She was like], ‘Would you guys shut the fuck up?’”

Everyone laughs; Ramsey continues. “She walked up with a napkin, that was inked all over it, put it on the table. It said, ‘It’s really nice to hear that you guys are really excited about local music.’ We just like to be part of something that’s bigger than us.”

The Hibernauts, on guitar solos: Vehige: “John Mayer went from being this clown to having all this street cred. I think it stems from his appearance on the Dave Chappelle Show.”

Jack Stevens: “I was gonna say!” [continues] Don’t you just hate good guitar players? Don’t you think there’s something wrong fundamentally with someone who really knows how to fucking wail on the guitar? It’s gross, it makes me sick. It’s like jerking off in public.”

Vehige: “One thing about the Hibernauts...you can print this: No guitar solos. No guitar wankery.”

Ramsey: “'People Better Than You'”?

Stevens, on the new EP: [ed. note: picture this said in a slightly bashful, non-arrogant tone] “I actually listen to it a lot -- which is kind of embarrassing when I’m driving around, blaring it out the window. I can’t help it, man. We did a KDHX sportlight or whatever, I heard it yesterday. I’m in love with the sound of my voice, I guess. I like hearing myself recorded.”

Vehige: “[You're doing all this while] wearing your Hibernauts shirt. With a Hibernauts sticker on your car.”

Ramsey, on his former cover band, Machismo: “We played in Soulard mostly. We’d do occasional random gigs, like the Enterprise Rent-a-Car grand opening. We were surrounded by cubicles, and a trashcan full of Anheuser Busch.”

“We played ‘The Ocean’ by Led Zeppelin. ‘The Bends’ by Radiohead. ‘Black Star’ by Radiohead, too,” Ramsey says. “A lot of Rolling Stones, that kind of stuff."