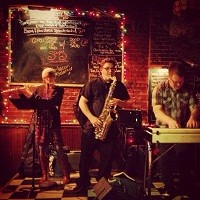 Photo courtesy of the Jungle Fire

If you weren't busy sleeping in 9:00 a.m. yesterday, thanks to the national holiday, you may have seen some familiar faces / heard some familiar sounds on your television. St. Louis' the Jungle Fire, named by RFT Music as one of seven local bands to watch in 2013, made watching particularly easy this week with an appearance on Fox 2 News in the Morning with Tim Ezell. The band played a soulful, upbeat track that surely served well to awaken those poor souls that didn't have the day off.

In our feature from January 10's issue, Michael Dauphin had this to say about the band:

Aptly titled The New Blood, the Jungle Fire's 2012 debut EP serves as just that: a potent injection of neo-soul nutrients for funk-soul revivalists. The south-city septet spent most of 2012 finding its footing and honing its live show, and it's amazing what a difference a year makes. It only took newcomer frontman James Fields a handful of gigs to transform from a bashful -- albeit talented -- MC to a legitimate, bellowing soul singer. The band itself is a learned group of scene vets pulled from rock & roll, punk, hardcore and indie circles (see Thunder Kid, the Disappeared, Bricklayer, Highway Companion), but while the spirits of punk rock ooze from its pores, make no mistake: The Jungle Fire is a Soul Band. It's dirty, it's technical, and it has a streetwise swagger that's simply damn fun.

The appearance serves as a preview to the Jungle Fire's upcoming January 26 show at Schlafly Tap Room with Ransom Note. The show is free.