Jamo Presents promises a concert series with less of a circus feel and more summer vibes. 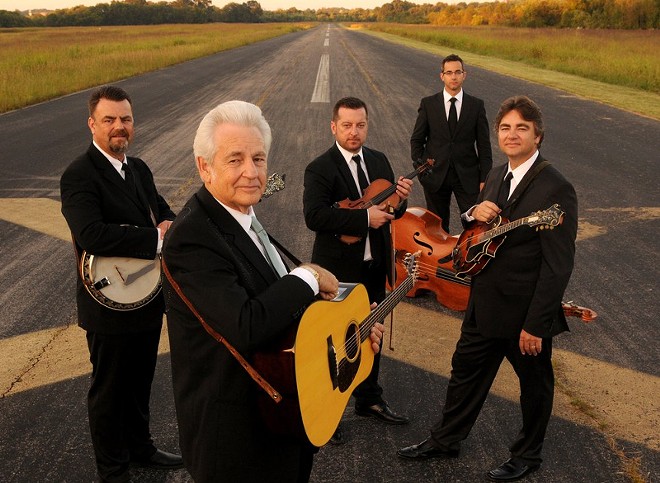 VIA IVPR
The Del McCoury Band is coming as part of the Lot at the Big Top series.

There will be no tightropes or circus animals at the Big Top (3401 Washington Avenue) for its newest offering — but there will be a show. In fact, there will be multiple shows that transform the circus home into a concert venue for an ongoing series from Jamo Presents.

The Lot at the Big Top will host concerts at the Grand Center venue, but without the circus feel, Jamo Presents founder Drew Jameson tells the RFT. With the series running from March through November, Jameson promises a unique experience for each concert due to the fluidity of the space.

Artists currently slated to perform include bluegrass act the Del McCoury Band, slated for April 28 at 7 p.m., and soul-jazz band the Greyboy Allstars, who will take the stage on March 30 at 7 p.m. Doors open an hour prior to the show for each night. Jameson says that the complete lineup is still coming together as artists work out the details with the pandemic in mind. There’s also some rescheduled concerts he’s hoping to add in, Jameson teases, and he’s excited to put more local artists into the mix.

“When we did stuff at the Big Top it was kind of traditional, concert promoters will just throw a show in a room and put their name on it: Jamo Presents,” Jameson explains. “And that's kind of what we did last year at the Big Top. This year, it's more of a takeover.”

The takeover of the space includes removing the bleachers and bringing in decorations in order to create a full production, complete with lots of color and more “summer vibes,” the promoter explains. Some concerts will allow the organization to bring in picnic tables and create a laid back environment in which to take in the music.

COURTESY KRANZBERG ARTS FOUNDATION
A takeover of the Big Top is coming.

While he jokes he’s no scientist, Jameson is hopeful the COVID-19 pandemic won’t interrupt the series: Most shows will operate in the summer months outdoors with airflow and where flu season isn’t providing an added threat like it does in wintertime.

He’s waiting for the tent to be set up in order to get to work on decorating, but the anticipation of the concert series is settling in. The Big Top is operated by the Kranzberg Arts Foundation, and Jameson says the organization has been great to work with. The challenging part is crafting the summer vibes and piecing together what that will look like for each show.

“Building on the success of our previous partnership with Jamo Presents, we’re excited to support Jamo in bringing this new concept and lineup to music fans in St. Louis,” Chris Hansen, executive director of the Kranzberg Arts Foundation, says in a press release. “The Big Top offers the perfect flexible space to create a unique experience for every concert.”

“I am looking forward to having a place to call home here for the whole season,” Jameson says. “It's going to be really nice to get comfortable and to build a relationship at the same location with all of our supporters.”


Tickets for the Greyboy Allstars are on sale now at JamoPresents.com, while tickets for the Del McCoury Band will go on sale February 18. Other acts will be announced at a later date.

Jenna Jones is one of the digital content editors at the Riverfront Times. She would love to talk to you about Harry Styles.
Read More about Jenna Jones
Scroll to read more Music News & Interviews articles (1)