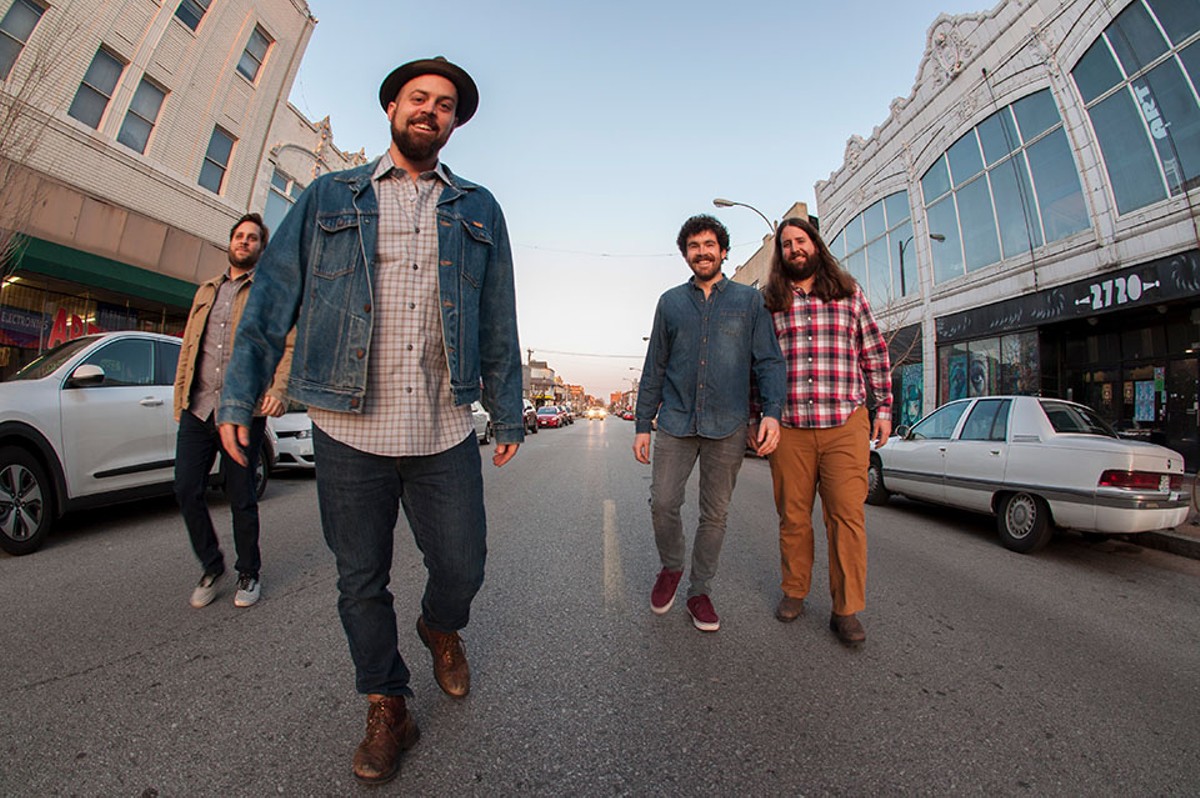 The Mighty Pines operated under the moniker Acoustics Anonymous prior to a name change in 2016. BRIAN O'SHAUGHNESSY

On most Sunday afternoons, the Shaw neighborhood's Fiddlehead Fern Cafe is a hive of activity. Most patrons show up for the caffeine and carbs — pour-over coffee, spinach-and-feta croissants and 2018's generational signifier, the avocado toast. But this week, more than a few people are invested in the live music occupying one glass-and-white-wood corner, where Gerard Erker, Neil Salsich, John Hussung and their instruments are positioned around a single microphone.

Toward the end of the trio's noon-to-two gig, the group is working its way through a spate of covers. Erker, on mandolin, rips through some speed-runs during a breakneck pass at Hank Williams' "I Saw the Light" ("for those of you who didn't go to church this morning," upright bassist Hussung later quips) and a harmony-sweetened take on Amy Winehouse's "Valerie."

The trio hasn't exactly fixed on a name — Hot Corn is its current moniker — but fans of bluegrass and jam-band music will recognized the musicians as three-fourths of the Mighty Pines.

"It's really become a way for us to practice, which is important," says Salsich, who plays guitar and sings lead on most tracks. "We try out new songs, and a lot of the good stuff makes its way into the Mighty Pines eventually."

And while an 11 a.m. load-in on Sunday morning may not exactly be the witching hour — the band had gotten home from a Saturday night wedding-reception gig at 3 a.m. — the early afternoon gig offers a relaxed, no-frills environment to work on material that may or may not fit within the Mighty Pines' purview.

"We realized that after a few months, you haven't been doing anything fresh, and you're bored," says Hussung. "We're better at trying to avoid that by pushing ourselves to move our sound forward all the time."

"Musically, this scratches an itch for us that we really love, but we can't put it on big stages," adds Salsich. "This acoustic, unplugged thing would be what we were doing if we turned out to be more of a folky trio, but that's just not where our band went. We've grown into a rock band, really — we have a drum kit and there's a total rock & roll musical experience, not a seated, hushed acoustic thing."

In the six years that these musicians have been playing together — first as Acoustics Anonymous, re-christened as the Mighty Pines in 2016 — that movement from folksy strummers to a jam- and groove-oriented music has been strengthened over a steady stream of hometown and out-of-town gigs. (Mike Murano completes the quartet on drums and, as a veteran of several funk-and-soul groups, gives the band a supple backbone for its groove-driven moments.) The band estimates that the Mighty Pines played around 100 shows in 2017, a number that nearly doubles when private parties, one-offs and unofficial gigs like the Fiddlehead Fern residency are factored.

So it's fitting that the band is burnishing its live-band bonafides with The Mighty Pines Live, its first live album. And while the band continues to make inroads in other markets, the album is a love letter to its hometown: The recordings are taken from two St. Louis shows from last July. The first was at Delmar Hall, where about 500 people were on hand to celebrate the release of the then-new Lonesome Blues album.

"It was a big moment for us," Erker says of that show. "I think we were viewed more professionally after that."

An even bigger crowd was on hand for the album's other source: a late-July set at the Missouri Botanical Garden's Whitaker Music Festival, where the Mighty Pines played to an estimated 5,000 people.

Salsich notes that the Whitaker gig in particular helped solidify the band's move away from its acoustic-folk roots toward a rock-driven sound. "People saw us on way bigger stages and things just changed a little bit," he says.

Hussung says that while the band has its "studio thing," its onstage chemistry is at the group's core. "We're very much a live band, so capturing that and putting it on an album and letting people experience that was beneficial," he says.

Toward the end of Hot Corn's set at Fiddlehead, Salsich introduces the group's last tune, a new song that Erker wrote called "Farmer Song." At least four cell-phone videos begin recording as the band begins. Would-be bootleggers need not worry: The band is releasing the song concurrently with its live album as a stand-alone single. It was recorded with Railroad Earth's Tim Carbone, who will be on stage for the Mighty Pines' album-release show this weekend at Atomic Cowboy.

"It's a tribute to farmers and raising animals humanely," Erker says of the song. The band recently completed a small tour of organic farms, playing as musical backdrop to a slew of farm-to-table dinners while giving a signal boost to a pet cause. "The tour is very much to raise awareness about healthy soil and pesticide-drift control, as well as helping out the local community and shining a little bit of a light on them."