The Mountain Goats at the Old Rock House, 6/20/13: Review, Photos and Setlist

Well, this was more like it. The last time the Mountain Goats played St. Louis, it was April of 2012 and they appeared at the Gargoyle in front of about 80 people. This wasn't because the Mountain Goats weren't popular - they'd played to full houses at that very venue in the past - but the result of poor publicity. At the Old Rock House last night, however, they played to a sold-out crowd that not only knew all the songs, but sang along like they were at a Dashboard Confessional (or Jeff Mangum) show.

John Darnielle, the Mountain Goats' songwriter and singer, has been on a roll these past few years. He's been plugging away since at least the mid-1990s, when he started releasing tapes on the hallowed Shrimper label and working his way through various indie labels. His earliest recordings were famously done in one take on a boombox, so it was a surprise at first to see him end up at 4AD, known for its lavish packaging and layered recordings. As it turned out, Darnielle did some of his best work there, including the three-album hot streak of Tallahassee, We Shall All Be Healed and The Sunset Tree. Now on Merge Records, he's settled into a band lineup of Peter Hughes on bass and drummer Jon Wurster (Superchunk, Bob Mould, Mother 13), and continued to release albums full of literate, often funny, often deeply touching songs.

Always a loquacious interviewee and performer, Darnielle has been embraced by the podcast world as of late. He has appeared as a guest bailiff on author John Hodgman's podcast, and he gave an incredibly revealing, candid interview to comedian Marc Maron. That interview ended with the unreleased"You Were Cool," a letter to a bullied friend that ranks with his most emphathic work ever.

In the process, Darnielle has built up a large, loyal audience, many of whom were not even conceived when he first picked up his acoustic guitar and tried to make sense of his traumatic past. How loyal? I met people at the Old Rock House who traveled from Denver, Nashville and Philadelphia just to be there.

For this tour, the Mountain Goats have returned to the duo lineup of Darnielle and Hughes. Although Wurster was missed, the two-person lineup actually does a better job of highlighting the lyrics and vocals (where, let's face it, much of the Mountain Goats' appeal lies). Walking out to a rapturous response, they opened with "Pure Gold," which originally appeared on the Songs About Fire seven-inch on the very, very defunct Cassiel label. On recent tours, Darnielle has rarely reached back before Tallahassee. For this show, however, he included a hefty dose of boombox-era songs. In addition to "Pure Gold," the set included "Cheshire County" (originally on 1995's Nine Black Poppies EP), and three songs from 2000's superb All Hail West Texas, which Merge happens to be re-releasing soon. He took to electric piano, not usually used in the live set, for a three-song mini-set climaxing with "Ezekiel 7."

In between songs, Darnielle told a few of his trademark rambling stories. At one point, he discussed a certain commercial he used to see in Iowa, and wondered aloud if it ever made it down to St. Louis. Apparently the commercial was about taking your children fishing. It featured a nine-year-old girl singing in the style of "Dear Mr. Jesus," a 1986 song about child abuse. "Take me fishing," the girl in the commercial sang, "because you only get one sunset a day." This always bothered Darnielle - not only because of the saccharine platitude of it all, but after all, "if you go fishing that late in the day, you ain't catchin' nothin'." This led, of course, into "Alpha Chum Gatherer," an outtake from Tallahassee, which he introduced as a song about "a drunk guy who goes fishing." 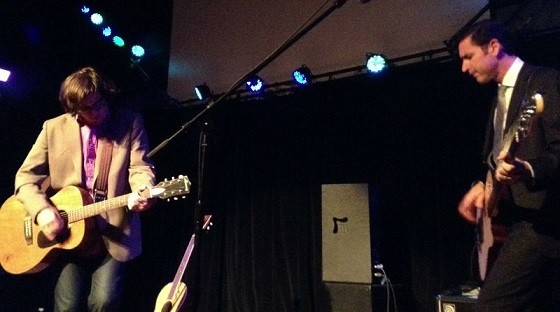 Always an animated performer, Darnielle was clearly enjoying himself last night, grinning at Hughes, at the enthusiastic crowd, or at no one in particular in between verses. Set-closer "No Children" was a particular hit with the crowd, who turned lyrics like "I hope you die! I hope we both die!" into a surprisingly joyful singalong. For the encore, they played the quiet "Maybe Sprout Wings," followed by two West Texas songs, "Jenny" and "The Best Ever Death Metal Band Out of Denton." Everyone sang along to the closing refrain of "Hail Satan! Hail Satan tonight! Hail, hail!" This, however, was no incantation from the dark arts, but an expression of empathy toward the hapless characters in "Denton." It was the perfect ending.

We who write about music love nothing more than to righteously champion some unknown, unappreciated artist. At one point, Darnielle was one such artist. However, as the Beatles-level cheering made clear last night, he has now found his audience after putting in years and years of work. That's an inspiring thing.

Continue on for the "Critic's Notebook" and complete set list.