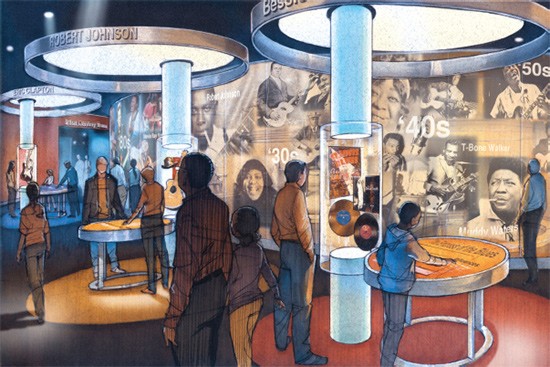 The National Blues Musuem (601 Washington Avenue) sets its sights on an opening in late 2014, which seems awfully far away -- far away enough to induce a melancholy tune, wouldn't you say? Luckily, eager music fans won't have to wait to get schooled on the blues thanks to a special free film and lecture series that begins tonight and runs through October. The series provides a taste of what's to come from NBM, featuring prominent historians and musicians who all share the common goal of educating the public about the impact of blues music throughout American history.

"This lecture series provides an important, adult-oriented education component about a foundational art form, the Blues, presented in a fun and accessible way," says Rob Endicott, chairman of the board of directors for the National Blues Museum. "One of the goals of the lecture series is to demonstrate interconnectedness of the blues to other related music styles, and the continuing direct influence and relevance to today's seminal music and artists."

For its debut event on Tuesday, August 27, guest speaker Dr. Lauren Onkey, PhD, who currently serves as the vice president of Education and Public Programs at the Rock and Roll Hall of Fame and Museum, presents "You Can't Get There By Yourself: Bruce Springsteen's Soul Roots." The lecture begins at 7 p.m. and takes place in the Central Library (1415 Olive Street; 314-241-0478) auditorium.

"Onkey is a great music educator. She's going to explain how important soul music as well as R&B were to Bruce Springsteen's early days of being a musician, and how that comes through in his performances, which celebrate blues, rock, soul and R&B simultaneously," says Dawne Massey, the producer of the film and lecture series.