The Safes, Left Arm, Roundheels and Thee Fine Lines at the Firebird, 7/29/11 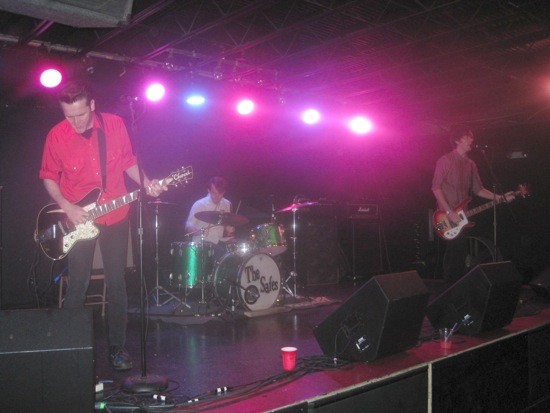 DJ Ryan Snowden started the night by spinning a mix of garage rock, which merged with New Wave and classic R&B between bands.

The Roundheels took to the stage first, yelling for the crowd to come to the stage and shake their asses. Not many complied, but that didn't stop the band from a raucous, enthusiastic set, leading into a brief but tight set from Thee Fine Lines.

Instead of a reunited Left Arm opening for the Safes, the bands swapped spots. The reason? "Alcohol," explained one insider.

The Chicago trio, who haven't played in St. Louis since Kissick's birthday party last year, tore into old favorites and some new songs from the prodigious demos they've recorded since their last local show. Always tight performers, the Safes ripped through their set, which was the sharpest, most polished performance of the night.

Despite their breaks due to guitartist Brad Evetts' school schedule, Left Arm picked up like they haven't been apart at all, just as loud and wild as ever. The audience crowded the stage in a steady bounce that grew in intensity. As the set continued, people started throwing ice and cups at the band. Not from anger -- it was all in jest, and grew until a few people were throwing themselves onto the stage. By the time Left Arm left the stage in a blaze of punk energy, at least one audience member was en route to the hospital with a gashed leg, an apt ending for a wild night of high-energy, noisy rock n' roll.