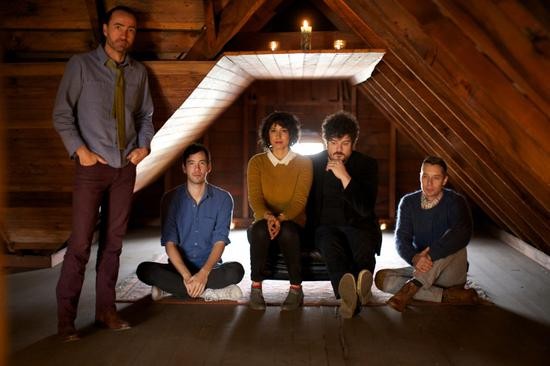 Courtesy of the Shins

The Shins, which began in Albuquerque and has since relocated to Portland (shocking!), has always been James Mercer and his cast of players. This time around it's Mercer with Richard Swift, Joe Plummer of Modest Mouse, Yuuki Matthews of Crystal Skulls and Jessica Dobson. In conjunction with this tour announcement, the band released a b-side, entitled "September," to its new single; listen below.

The Shins: "September" (b-side of "Simple Song" 7") from Record Store Day on Vimeo.

The last time the Shins were in St. Louis was 2007, also at the Pageant. Earlier shows here include a 2001 stop at the Rocket Bar -- at the time the band was on the heels of its debut album Oh, Inverted World. Matt Harnish, previewing the show for the RFT, saw the writing on the wall, saying:

Hailing from the musically mysterious city of Albuquerque, N.M., Sub Pop recording artists the Shins have released one of the most startlingly accomplished debut CDs of the year with Oh, Inverted World. Touching on a number of popular indie-rock subgenres (a hint of Modest Mouse's angular angst here, a splash of the Apples in Stereo's '60s pop there) without fully belonging to any of them, the Shins, one of a string of fine poppish bands Sub Pop has brought to the world since its grunge heyday, have managed to come up with a comfortingly familiar sound all their own. Their reluctance to be pigeonholed, along with the assured songwriting of bandleader James Mercer, should help the Shins appeal to a broad spectrum of indie-rock fans when they perform at the Rocket Bar on Tuesday.

Even then, Mercer had already re-located to Portland, and Harnish's predictions of fame and glory proved understatement. Port of Morrow, out March 20, will be the band's first full-length not to be released by Sub Pop. Instead, Morrow will be under Mercer's own Aural Apothecary imprint, though it will be distributed by Columbia Records.