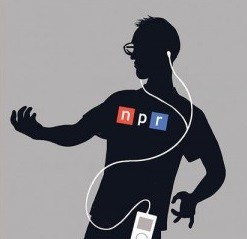 If you are like me, you drive a car with a broken cd player. So you have to listen to the radio while driving, and you end up on NPR most of the time because you are sick of Adele on the commercial stations and your favorite independent music channel always seems to have a zydeco show on when you're in the car. (Ahem, KDHX.)

But just because you're listening to NPR talk shows doesn't mean you won't hear some great music. In fact, some of the most wonkish news programs on public radio feature some truly groovy theme songs. Take for example, these six shows:

6. On The Media The theme song to "On The Media" is a variation of "Disposable Genius" by bassist Ben Allison. Even among the nerdy world of NPR, this tune often goes unnoticed. At the time of writing this, the video below was the only trace of this song on YouTube and it only had seven hits. I believe with all of us combined, we can double that!

5. All Things Considered Perhaps the most iconic of NPR themes, "All Things Considered" shows the power of a simple melody. It is peppy and vaguely patriotic, which means it basically sounds like something you'd hear on Sufjan Stevens' Illinois record. Listening to the daily program, the primary melody reprises itself as an interlude by a'la carte instruments throughout the daily program. My personal favorite is the upright bass version.

4. The Moth Radio Hour "The Moth Radio Hour" could be NPR's edgiest program. For example, last weekend Jillian Lauren told a detailed story about her experience as a call girl exported to Brunei. Fittingly, the show uses "Uncanny Valley," an obscure Tortoise-esque jam by San Francisco group The Drift. Like the best stories on "The Moth," The Drift's tune begins by raising eyebrows and reveals its purpose later. There is no distinct melody, but the spy-movie funk vibe is its own statement.