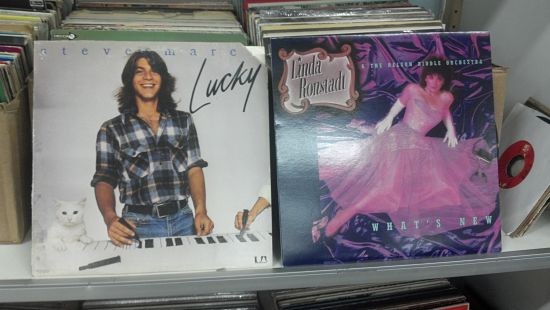 Allison Babka
These are on two-for-one special.

Did you put on a party hat and celebrate the United States' birthday all weekend? Sure you did -- we caught you lathering up strangers at your foam parties and proudly sporting your sequined hats at Fair Saint Louis. And you know what? It's your constitutional right (we think?) to fete the red, white and blue any way you see fit -- especially if it involves setting things on fire and consuming mass quantities of cheap beer.

Those are all great activities to celebrate the U. S. of A., but we at RFT Music did one better -- we searched for the weirdest music memorabilia St. Louis that thrift, consignment, antique and resale shops had to offer. Yes, we happily spent dozens of cents on some gently used goods (We're thrilled with the $3 vinyl "Do They Know It's Christmas?" single we took home!) while laughing our asses off at the relics of Mom's closet. It's the American Way, people! So as a late birthday present to this great country, we present the six best music-related items that still need loving homes.

We're not sure how Steve March has escaped a revived career thus far. Just look at this album -- A disembodied hand! A piano drawn from marker! AN ADORABLE KITTY! And if you flip the jacket over, you'll find a very serious March in a baseball uniform, leaning on an invisible bat in front of a cartoon stadium. Everything about March's Lucky is begging to be the Rickroll of 2014. But it turns out that March actually has cred; he's the son of crooner Mel Tormé and stepson of actor/comedian Hal March, to whom this beautiful album is dedicated. Check his pipes.

We grew up in a household absurdly in love with Elvis Presley; seriously, the family Viva Las Vegas and Blue Hawaii VHS tapes wore out from so much use, and a giant Elvis clock has been hanging in our parents' bedroom for 25 years. We've personally never seen any of the famous velvet Elvises until now, though. Is this thing the real deal? We have no idea. But we sure as hell want to wrap the King's hunk-a burnin' love around our shoulders.

Oooooh, David Cassidy, with his groovy vests and his Steve March hair. This little Partridge hatched out of his little egg as a pure, musky man, and now we have the poster patch to prove it. What the hell is a poster patch, anyway? Until now, we had no idea that it's a "completely washable vinyl appliqué developed by Synergisms." Weird. Doesn't matter -- we think we love you, anyway.

See a cabal of freaky, saxophone-worshiping clowns on page two, if you dare.