The Six Worst Songs in Movies 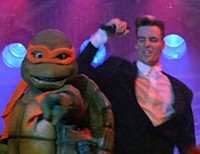 Last week, RFT Music editor Kiernan Maletsky pointed out many great film and music cohabitations at this year's St. Louis Internationally Film Festival. But not every insertion of music into movies is as seamless as A Late Quartet. Here are the six worst uses of songs in movies. Let us know your picks in the comments below.

6. "The Mirror Song" by Robin Williams and Thomas Dolby, from Toys Toys was a commercial and critical flop, and I've probably watched it over twenty times. Quick plot summary: Robin Williams works at a toy factory whose new owner plans to use the facility to make war toys that will influence kids to join the military. Williams develops a complicated scheme to shut that whole thing down, but he has to get past security watching the factory from surveillance cameras. To bypass them, he and his crew trick the security guards into thinking they suddenly got MTV by staging a music video in a hallway, thereby creating a diversion. Maybe it's telling that the only surviving video of this scene online is from a handheld camera operated by a child. (See above)

5. "Same Song" by Digital Underground, from Nothing But Trouble Why Digital Underground was written into Nothing But Trouble - that movie where Chevy Chase and Demi Moore are arrested for running a stop sign in a small town and are put to an unfair trial by a grotesquely decrepit Dan Aykroyd - is unclear. Why it seemed necessary to have a rendition of "Same Song" in the film with an organ solo courtesy of Aykroyd while Chase squirms like he's watching Fletch 2 is even more hazy. Also, there's quite a bit of Tupac on background vocals.

4. "Twist and Shout" by The Beatles, from Ferris Bueller's Day Off I am no parade expert, but I am pretty sure they don't let any high schooler with a leopard print vest bombard a float and lip synch "Twist & Shout." In the event that this does occur, I am fairly certain that the entire city doesn't turn into a spontaneous choreographed party. Also, parades usually don't happen in the afternoon on school days.