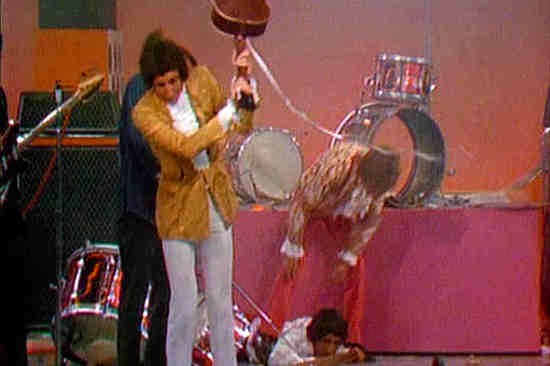 The Who wraps up "My Generation" on The Smothers Brothers Comedy Hour in 1967.

Fans in St. Louis are singing "The Kids Are Alright," now that the Who has announced that the Gateway City will be part of its 50th anniversary tour next year.

The iconic rock band from England plans to visit Scottrade Center on Thursday, May 7. Tickets go on sale to the general public at 10 a.m. local time Friday, October 17, at www.thewho.com. Citi cardmembers will have access to a presale beginning Monday, October 13, through Citi's Private Pass program.

The tour, dubbed The Who Hits 50!, kicks off in Tampa, Florida, on April 15. St. Louis will be the tenth city on an eastern North American tour leg that also includes Houston, Chicago and Atlantic City. The band will return to North America in the fall for a second leg throughout much of the northern states and Canada. The tour is presented by AEG Live.

The Who released its first single, "I Can't Explain," in 1964, and the group will showcase its five legendary decades of rock during its 50th anniversary tour by performing hits spanning the years. The band also plans to release a corresponding album, Who Hits 50!, on October 27, assembling a definitive collection of the Who's greatest tracks.

In a press release, vocalist Roger Daltrey said, "This is the beginning of the long goodbye."

"Trying to stay young. Not wearing socks. Growing a great big Woodcutter's beard. Might even wear a check shirt on stage and get a tattoo of a Union Jack. Always a fashion victim," guitarist Pete Townshend added. "But under no illusions. We are what we are, and extremely good at it, but we're lucky to be alive and still touring."

Below, check out a few of RFT Music's favorite songs by the Who.

Daltrey claims he's from Oz, Townshend smashes a guitar, and Keith Moon's drums explode on this 1967 episode of The Smothers Brothers Comedy Hour.

This is Moon's second-to-last performance with the band before his death (we think).

This is just a fantastic performance at LiveAid in 1985.