There Can Be Only One Honeybadger in St. Louis! A Vote to the Death [Update: We Have a Winner!] 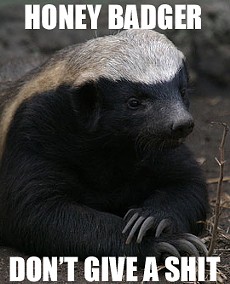 Update, 11/22/11: Like trying to drink out of a glass lying down, honey badgers are tricky little shits. They might eat your pet cobra or take a leak in your grandma's mouth because that's just how they get down. THEY DON'T GIVE A SHIT.

Thanks to everyone who voted. Honeybadger #2 fans helped the band slide comfortably into first place. So congratulations Ryan and Corey, you are worthy of keeping the name Honeybadger. But WAIT, THERE'S MORE. While we weren't looking, Honeybadger #1 totally pulled the matted, blood-stinking wool over our eyes. They already have a new name! They've had the new name for longer than the entire life span of a gastrotrich (three millimeter long freshwater microorganisms!)! That new name is Atomic Shadows, which is pretty sweet actually, because atomic bombs sometimes leave permanent shadows of the things they destroy, prior to the destruction. Science! Their first tweet was on November 18, so they really got us good. We don't give a shit though; props to both bands for lending their egos and sounds to us for the day.

It's come to our attention that the City of St. Louis is home to not one, but two bands named Honeybadger, after the viral phenomenon, that, like Rebecca Black's "Friday" really gets to the heart of what was important in 2011: not giving a shit, and wishing that people like Rebecca Black would get their faces ripped off by a particularly ravenous honey badger. Honeybadgers don't give a shit. They eat larva, those sick bastards.

Since we love nothing more than a little healthy competition, we asked both bands to submit tracks so you, dear reader, could vote in the comments and decide which band should be allowed to keep the name. Because we believe in democracy, even here in America.

Disclaimer: Just so you know, they don't give a shit about this.

The first Honey Badger is a recent transplant to River City, straight outta the suburban ghetto town of Springfield, Illinois. Colin Helton and Matt Scherer's other band, Gypsy Collabo, is still based in the Land of Lincoln, and recently won the Illinois Times Best Of award for Best Hip Hop/Rap artist. Here's what Honey Badger #1 (Colin Helton, Matt Scherer, Jeff Lang) has to say for itself. "Goodnight, Tonight!" by Honey Badger

When did you guys start playing together?

What drew you to the name Honeybadger?

The name Honey Badger attracted us because A) that little rascal is just crazy, it best described the blues/rock direction we were going in, and C) it had a buzz about it.

How little of a shit do you give?

Well, it's only rock and roll, but I like it. You tell me.

Three words that describe your sound that are not current genre distinctions?

If someone compared my band to this band, I would fucking kill them:

If we ever got compared to... eh, mostly anyone on Top 40 radio. That music is so banal and base, and basically planned obsolescence.

It is the perfect music to listen to when you're:

It is the perfect music to listen to all the time, because we have a dynamic range. We have slower ballads, but harder rocking tracks as well.

Endeavors that are not remotely musical that may or may not be worth mentioning:

We will not only be the first band to play in space, but also we will um... all be widely recognized as frontrunners in other fields. Matt may be a concept car designer. Jeff may be an award winning psychoanalyst. And I will be recognized as the last of the international playboys. Among other things.

Anything else we should know about Honey Badger?

We are a kick ass trio. We just love to play for people and want nothing but the best for ourselves, but also the ones closest to us, and most of all our fans. We want to share in our total success.

Hear from the other Honeybadger and vote on the next page.